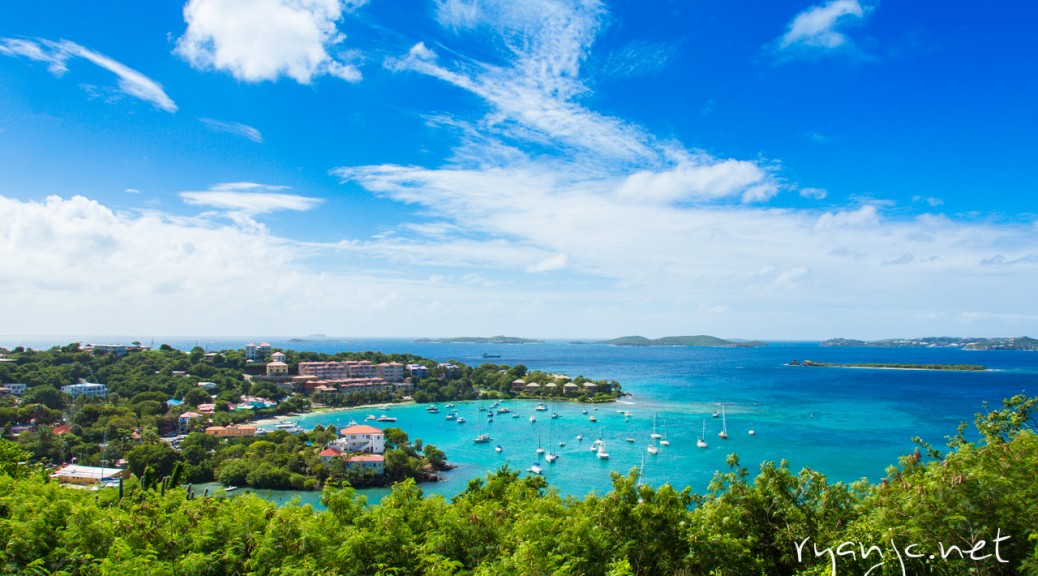 The last stop aboard the Summit on our week-long cruise was in the US Virgin Islands (USVI), St. Thomas, the largest of the US islands. Celebrity truly saved the best for last and better yet, this gem belongs in the States! The port where we landed was Charlotte Amalie, the capital of the USVI. There are a handful of high-end boutique shops, but not much else nearby. The main attractions are either Megan’s Bay or Trunk Bay (on St. John). We opted to take a Celebrity excursion tour to St. John, about 30 minutes away from the ship. It’s well worth it to pay a few extra dollars to take the ship’s excursion so they guarantee that you be back to the ship before it departs. St. John is also fairly easily accessible by a public ferry that run between the two islands. 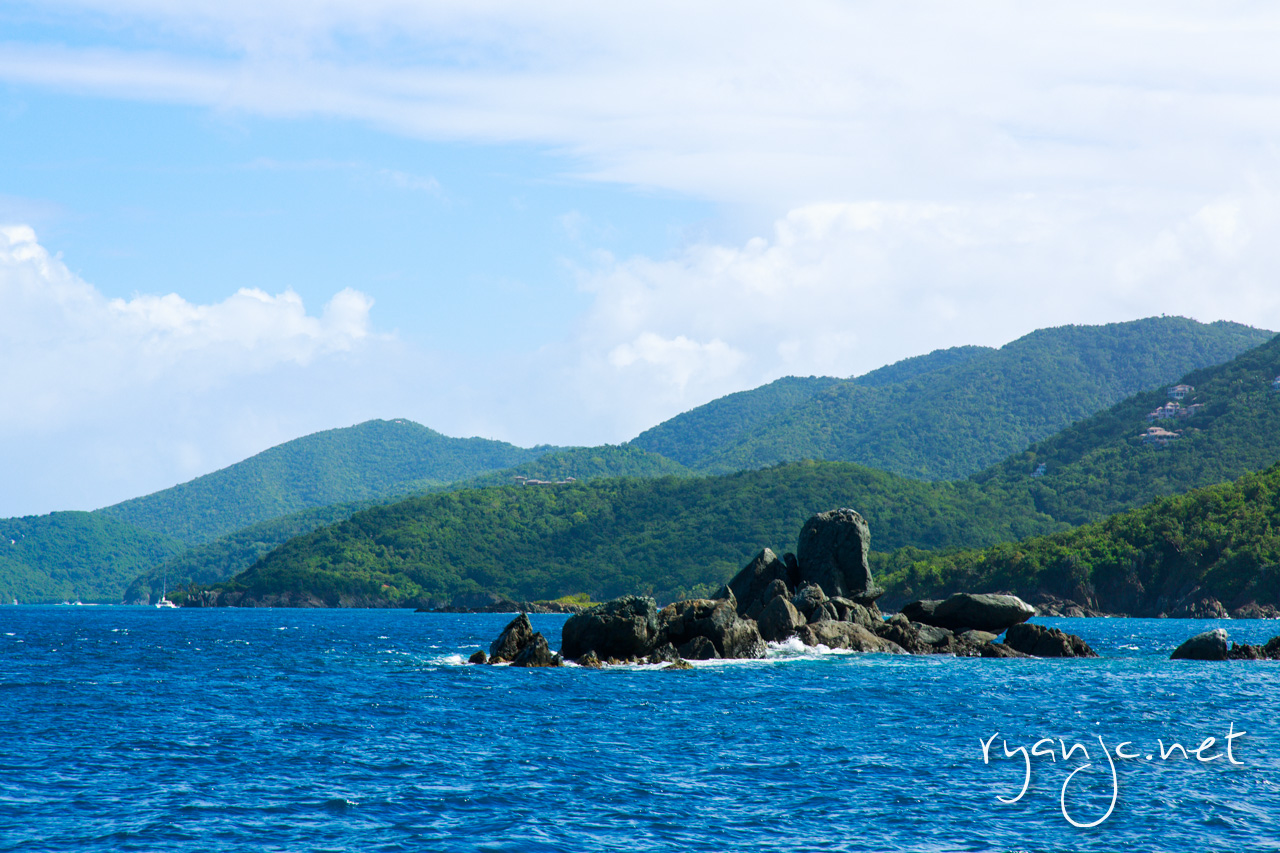 Our tour lead us through the Caribbean Sea to Cruz Bay. The guides were knowledgeable about the history and pointed out significant historical landmarks along the way such as where Christopher Columbus crash landed in the “new world” and who owns what pristine ocean-view property. The captain also mentioned how the USVI was purchased from Denmark for $25M in gold in 1917, coincidentally the first time the US went into debt. With the view and pristine beauty of the islands, I’d say it was absolutely worth!

Once you get to Cruz Bay, there are several open-air taxis (jeeps) waiting to take you into the Virgin Islands National Park that encompasses most of the island. Before the park was established, there were a few residences established and they have since been grandfathered making them very valuable to own and rent. The island is mostly undisturbed and the roads are never have any traffic (definitely another win for this Caribbean destination). The main street (North Shore Rd) winds through the northern edge of St. John and has lookouts along the way that the taxi stopped allowing us ample time to snap some breathtaking photos of the view.

At the top of the first hill overlooks Cruz Bay where our boat dropped us off. I didn’t realize how much color and how beautiful it was. Taking a step back to take it all in is quite special. The next overlook was Caneel Bay. A private beach that hosts weddings for a bargain price of $20,000 to rent for the day.

The last overlook contained the million dollar view that we had been waiting for all week, actually, salivating over for weeks prior to the trip. Words cannot comprehend just how incredible the view is of Trunk Bay.

As much as I would have loved to sit there and take it in for the rest of the day, the driver beckoned us back into the car and we were off to swim in the bay.

Admission for the day is $4, kids under 16 are free. They have plenty of showers, restrooms, and changing areas to use. The beach itself is a narrow stretch of soft sand. There is some shade under the trees towards the back of the beach. Oddly enough, it rained while we were on the beach and we found ourselves taking cover under the trees to prevent from getting wet … on the beach. After a quick shower silliness, we went snorkeling for the rest of the afternoon and it turned out to be a perfect day.

The water in Trunk Bay was the clearest all week and the area was teeming with aquatic life. Thus far, I hadn’t been too impressed with the fish, coral, and clarity of the Caribbean, but this day really made the trip. I’ve only gone snorkeling in the Western Caribbean where there wasn’t many fish either and Phuket, Thailand where the water was extremely clear and abundant with life. To be fair, the Caribbean is known for its beaches and not it’s snorkeling.

The park has an underwater trail that you can follow that leads you around the aquatic life and points out some of the interesting coral formations. The bay itself is well enclosed on the sides and there’s a small island to prevent it from getting too wavy. It’s definitely a great area for beginners. 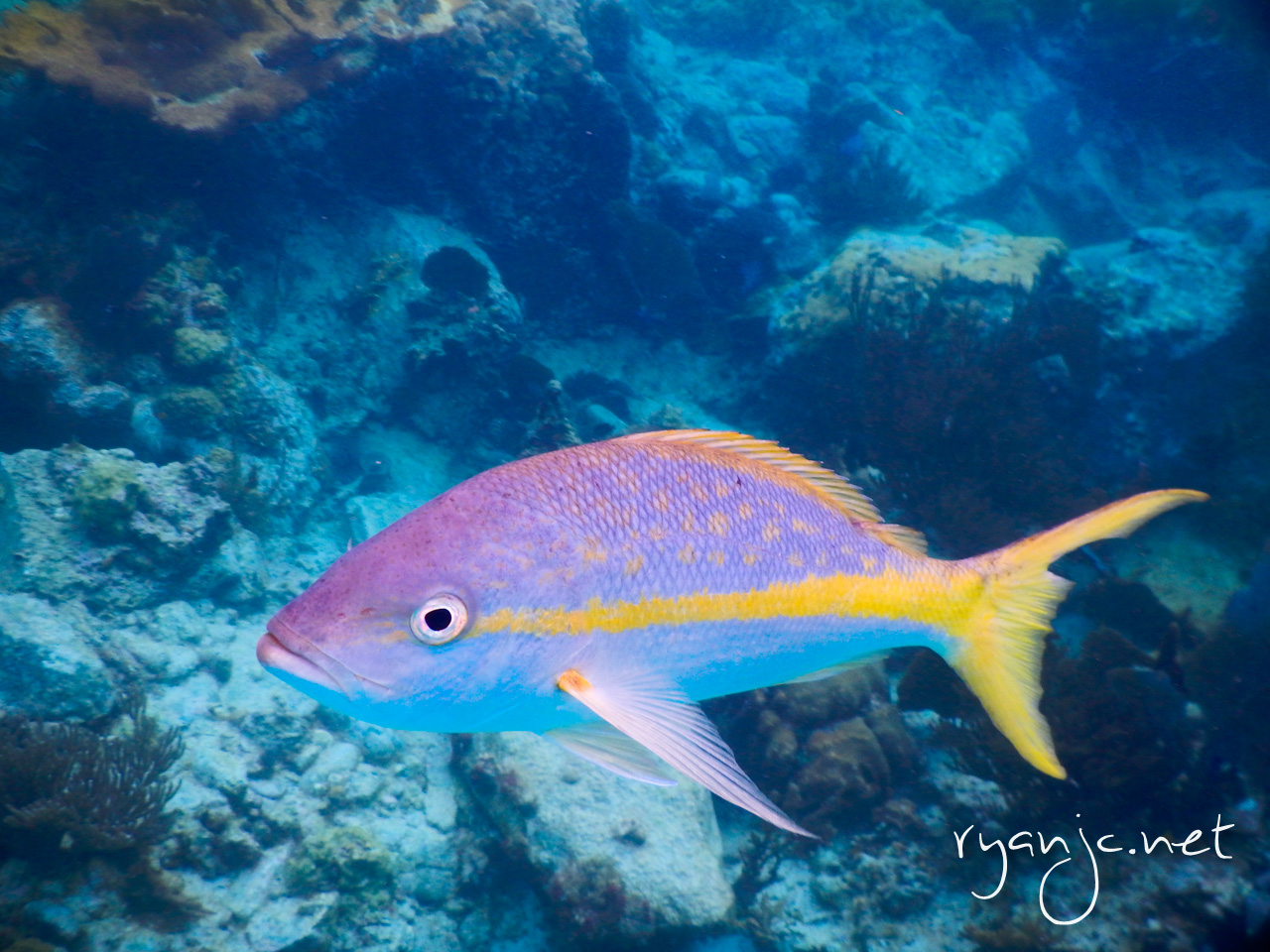 I turned around and this guy was swimming straight at me and scared the crap out of me. 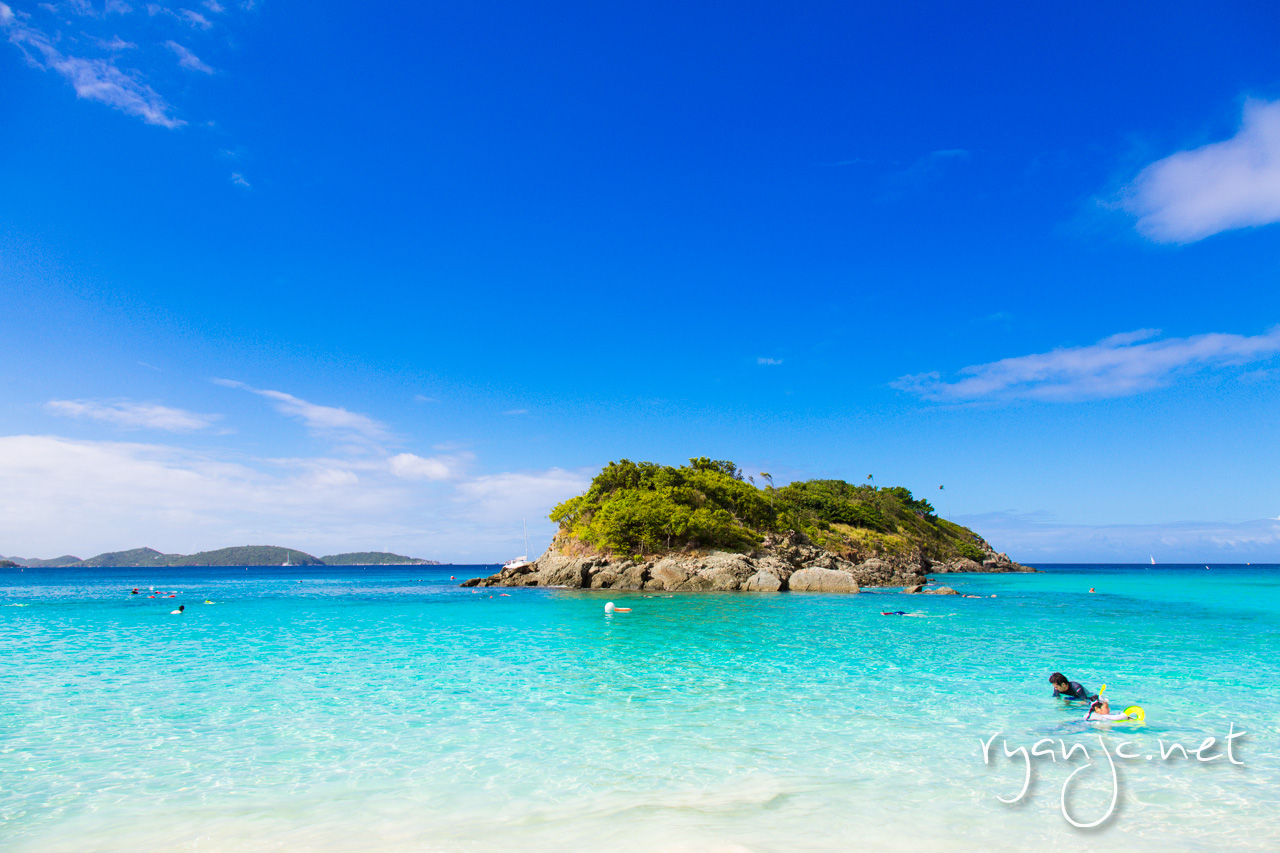 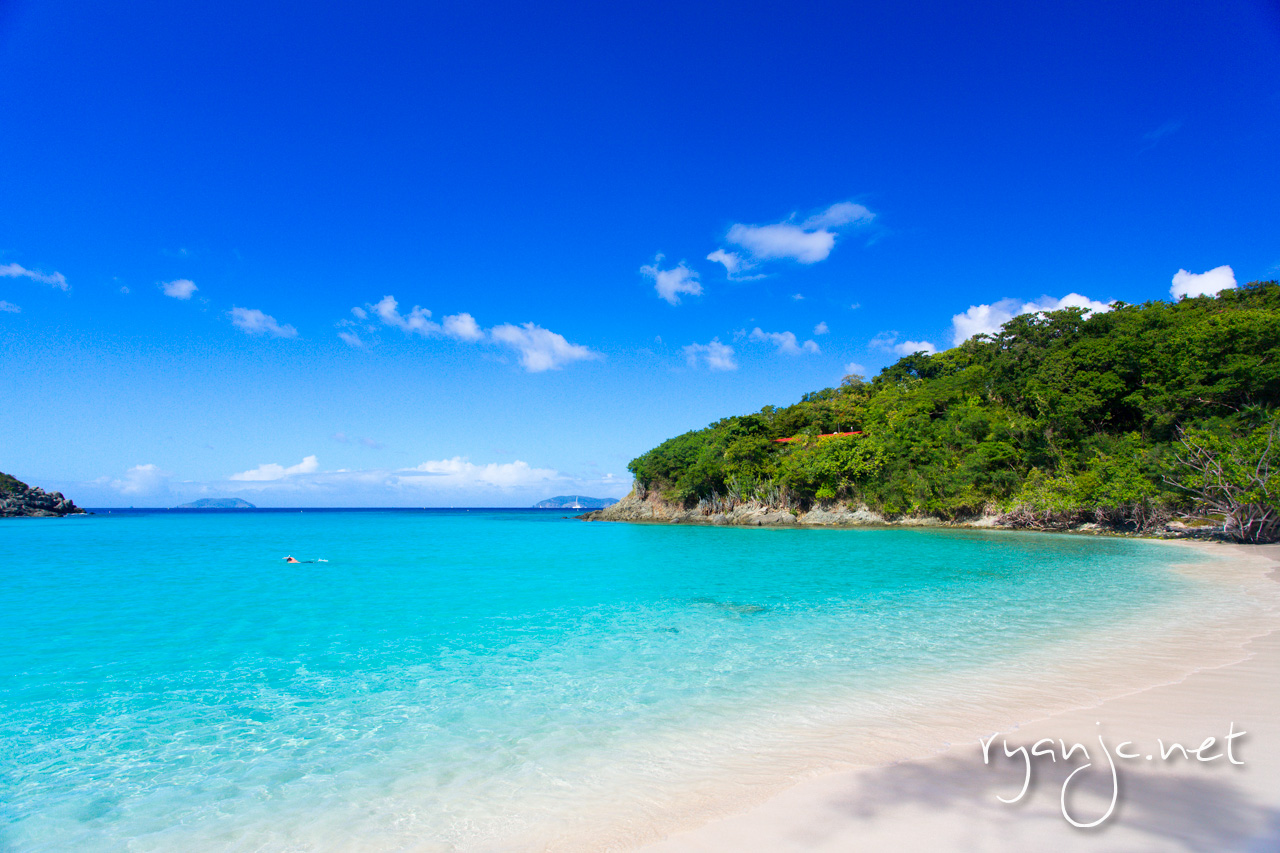 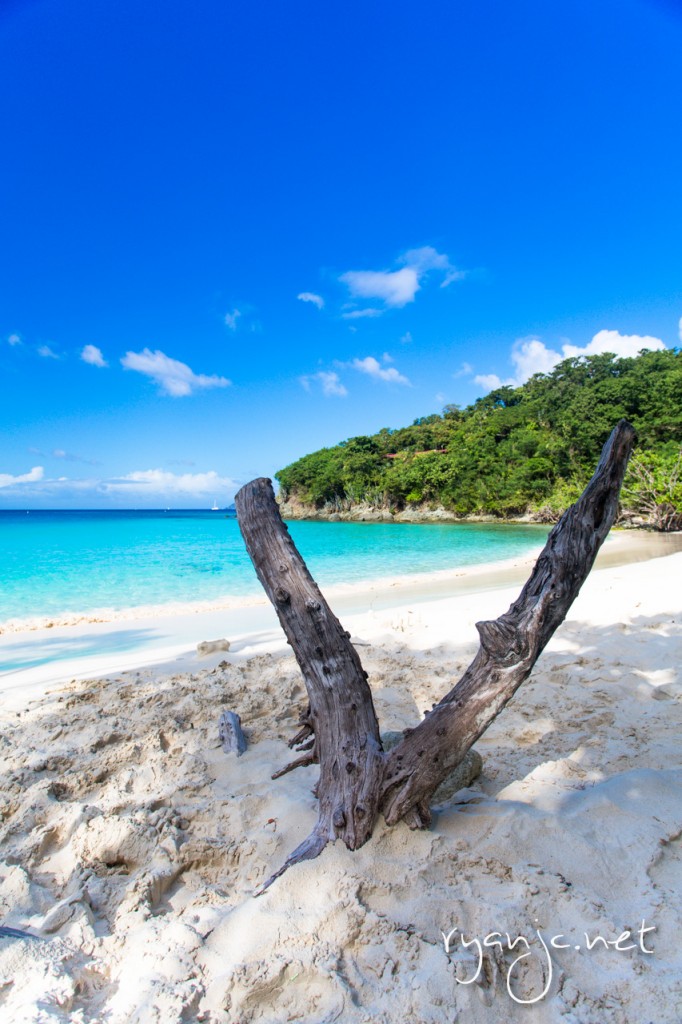 The afternoon quickly came to a close as it was time to start heading back to the ship. On the way back, I snapped this gem of the top of the taxis. It adequately sums up island living. On the boat back to the ship, it started getting cloudy and rained again. We were lucky to have spent most of the day out of the rain!