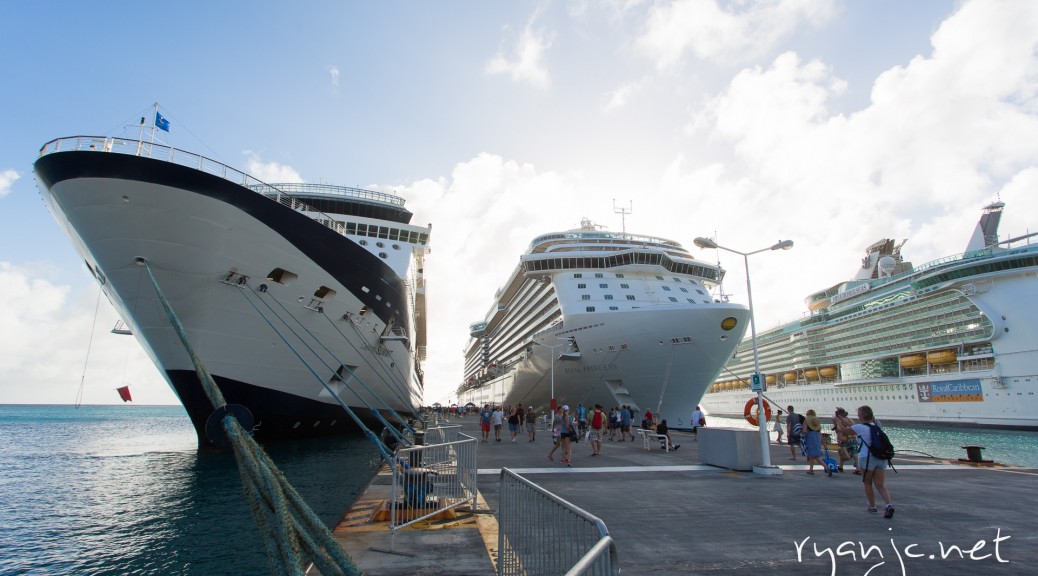 The next port of call was the Dutch/French island of Sint Maarten / Saint Martin depending on which side you visit. Ships usually all dock on the southern point of the island on the Dutch side in Phillipsburg. St. Maarten is a highly developed and commercialized island. Out of the entire trip, I would say it has the most development in thanks due to its famous international airport, strong European influence, and that it’s a very popular cruise destination. It’s also home to one of the top Caribbean medical schools, AUC. 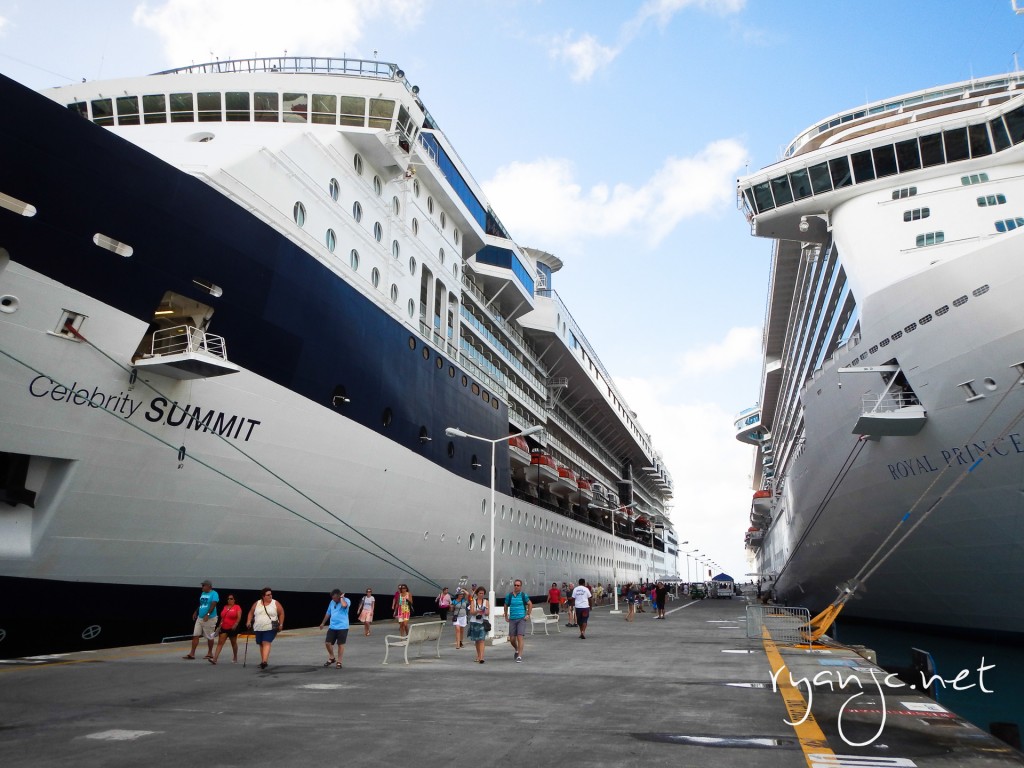 The day we arrived, there were at least 3 other giant vessels – Princess’s flagship vessel, the Royal Princess, Royal Caribbean’s Freedom of the Seas, and the MSC Musica Four large ships is not unheard of for such a busy port. In fact, it’s a relatively lighter day since the port can handle up to six to seven large cruise liners. It’s usually best to consult the Cruise TT timetable while planning your trip to gauge how crowded the islands are upon your arrival.

Getting around the island is easy. English is widely spoken and people are friendly, almost too friendly (more on that in a second). The island is so commercialized and developed that it makes for doing your own self-guided tour a breeze without booking an excursion through the ship, hence the going Dutch title. We wanted to visit the western part of the island and had planned to take a public bus from Phillipsburg to Mullet Beach. And by bus, I mean minivan the size of an airport shuttle. Walking the city streets, there are no officially designated bus stops, you just have to flag down the right van going to where you want to go. We were able to hail and empty one and hopped in. The fare was a very reasonable $4 USD for the two of us, each way. We were the first on, but definitely not the last. As we drove across the island, it quickly filled up. There were three rows of seating and each became filled with four passengers. With the driver, we had fourteen people in this little van. It was a tight squeeze under the warm sun, but somehow we all fit and everyone was able to make it to their destinations. People getting on and off would also be extremely courteous, greeting each other on the way and helping people coming on and off. 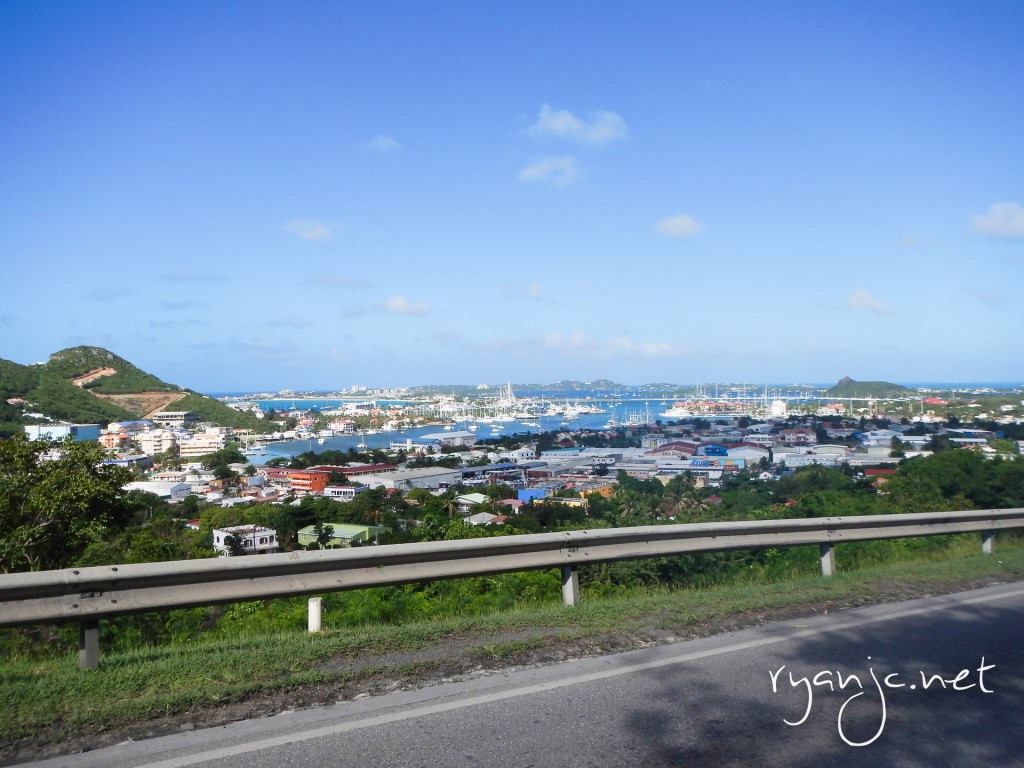 When we got to the Mullet Beach area, we wanted to see AUC which was nearby so we walked through a golf course and up a hill leading up to the school. Being the week before Christmas, the school was deserted and we weren’t able to go in to take a look around. From the top of the hill, the school overlooks a large part of the island and the gorgeous waters of Saint Maarten. It definitely looks like a beautiful place to study medicine.

Walking back down, we passed a beautiful rocky overlook and walked down to Mullet Beach. This beach is relatively more remote and less known than Orient Bay on the French side, which draws huge crowds every time. The people on the beach were mostly locals and people staying at nearby hotels, so cruise traffic was definitely at a minimum. We were able to find a nice mangrove tree on the eastern end of the beach to take shelter. The beach itself is very well protected because it is not facing the open Atlantic side and the water is clear and there were many schools of fish. You can swim 10 feet off shore and follow the rocks as the fish are just congregating around the coral and rock structures. 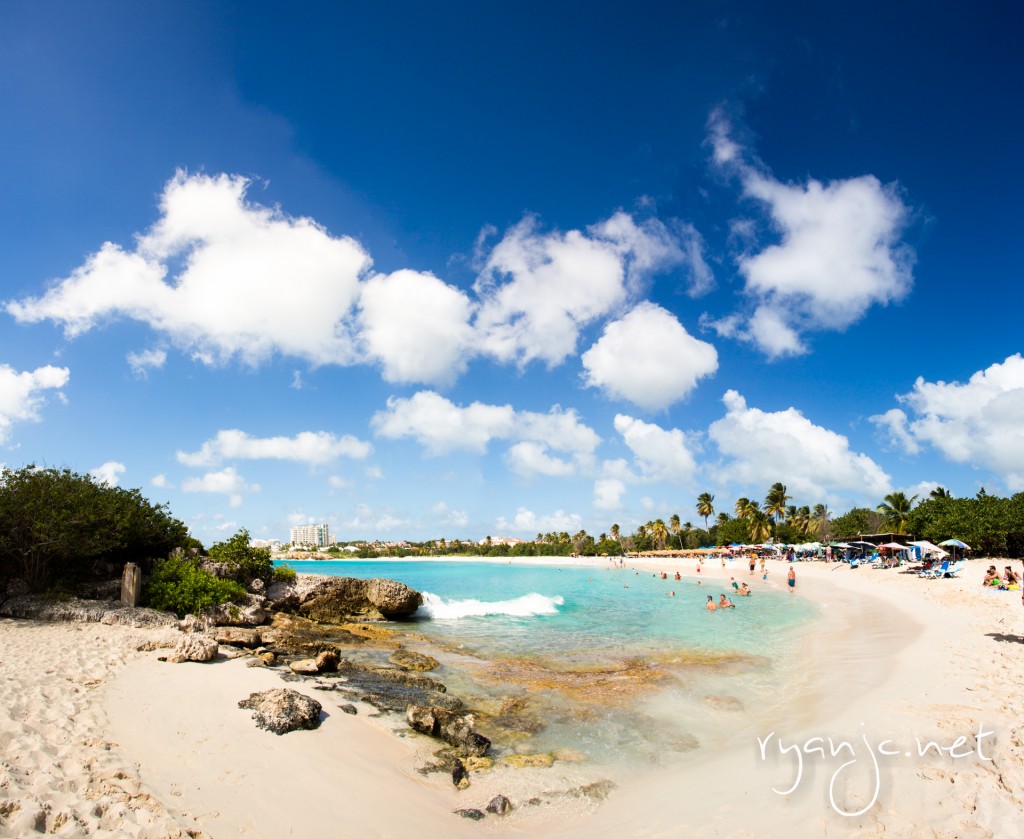 After a couple hours of relaxing on the beach, we wanted to make our way over to the iconic SXM, Princess Juliana International Airport. What makes it famous is that at the end of the single runway (Runway 10) is a small sandy beach, Maho Beach. Every day, hundreds of tourists flock to watch landing after landing of commercial and cargo planes land just feet from the beach. Since we spent too much time on the beach, we missed one of the 747 landings for the day, but we did see many other planes come and go.

It’s really something to be standing so close to planes landing just overhead. The pictures speak for themselves as the experience is like no other. The planes come so close to the beach that the bigger ones commonly cause a wake on the water and generate some large waves. Similarly, planes taking off can create an immense amount of thrust that they blow sand and crazy tourists down the beach. There are caution signs all around warning of the blast from these aircraft, but tourists being tourist ignore these warnings and try to get as close as possible and brace the takeoffs. We made such a mistake and let’s just say it will never happen again.

On one takeoff by an InselAir MD-83, we could see the pilots happily waving back at all the screaming crowd as the plane made its final turn onto the runway. The plane seemed to take an extra wide turn before positioning itself as far back on the runway as it could go. Before long, the plane was at max thrust and hot sand was blowing everywhere. What lasted less than thirty seconds, felt like 10 minutes. The crowd behind the plane was being sandblasted and blown over and down the beach towards the water. I was quick to duck and cover and tried to make myself as small as possible. I couldn’t see anything in the sandstorm, but I could hear the screams of the crowd and feel the sharp sand as it flew all around me. The aftermath wasn’t pretty. Many people ended up tumbling down the beach into the water, getting a face-full of sand, and getting the wind knocked right out of them. 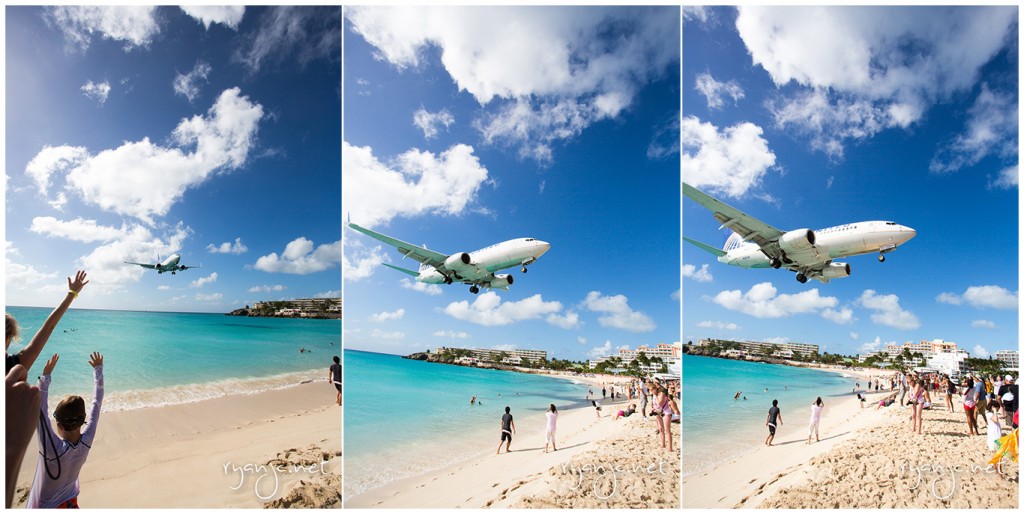 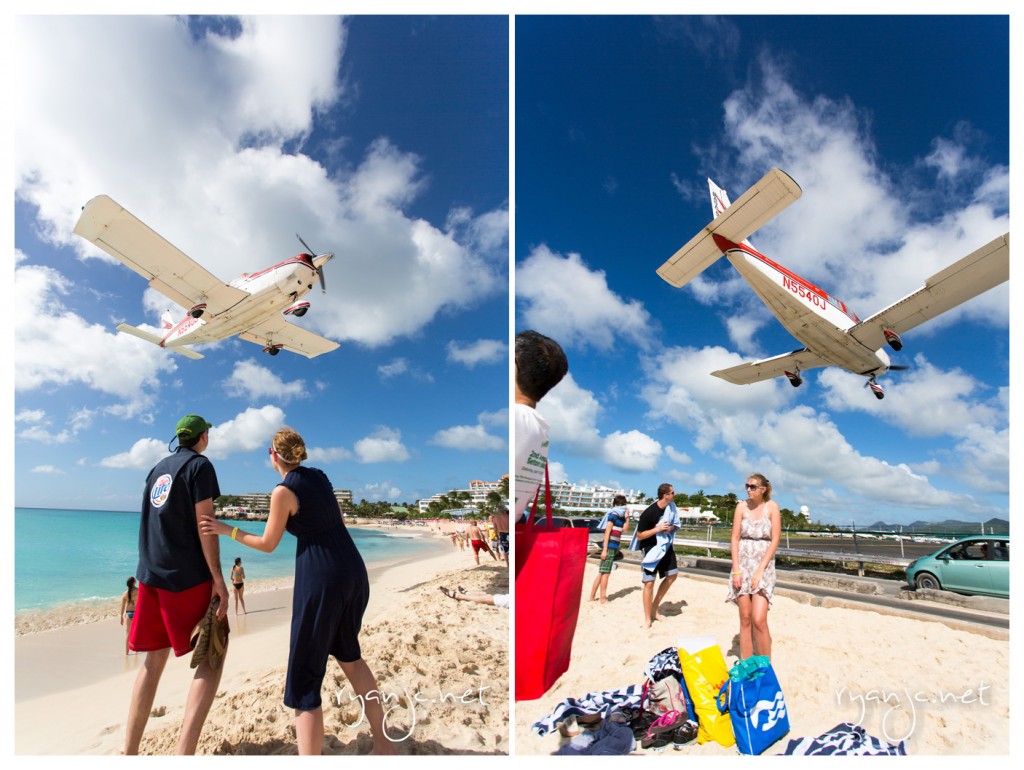 When you go, I suggest standing clear to the sides of the beach and watching all the naïve souls congregating directly behind the jets. You can watch the videos on Youtube of all the poor people tumbling into the ocean as they hang on for dear life. There are several bars and restaurants on southern end of the beach where people watch the planes come and go all day.

We departed the airport at about 3PM after deciding to not wait for an incoming Air France 747. We were originally planning on catching a taxi back to the pier but managed to find a bus on the main road back o Phillipsburg. When you go to further parts of the island, you have to be mindful of some of the bridges that raise for fifteen or so minutes about 6 times a day. This can lead to long traffic delays and you do NOT want to be late back to your ship. Since we gave ourselves plenty of time, we had an extra hour to walk around the shops and beach by the pier.

It was an incredible day unlike any other. The beach we picked out to visit was gorgeous and the experience of standing at the end of an international airport runway was unforgettable to say the least. Watching the videos of the planes taking off and landing prior to our trip had me so excited for the experience and I definitely look forward to going back not only for it but also the Saint Maarten beaches. St. Maarten definitely ranks as the number two island of the voyage after St. Thomas (the final island).