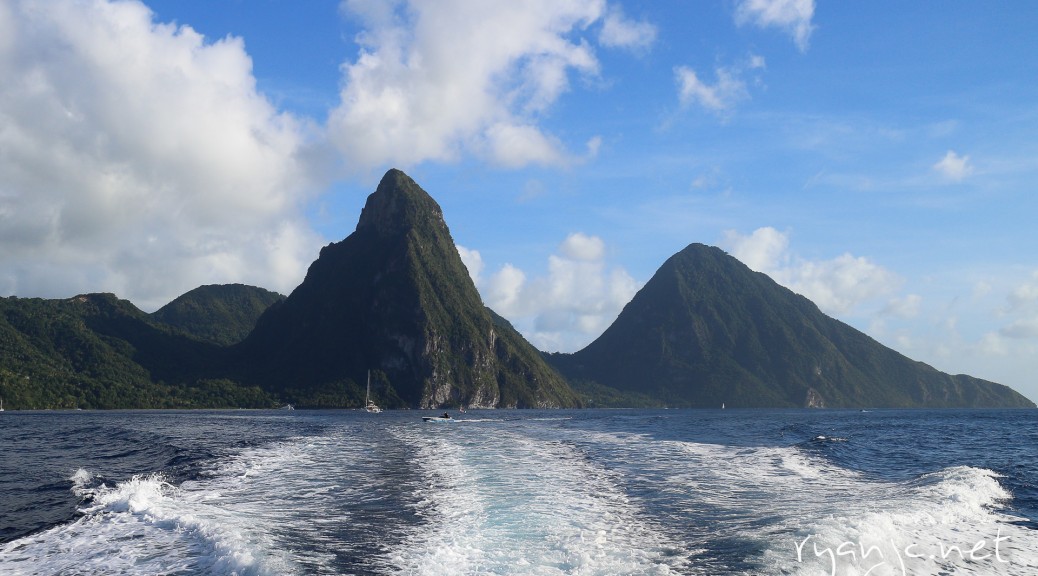 Our second island stop brought us to the island of St. Lucia and the capital port city of Castries. We started the morning a bit late and was surprised to wake up in the port. The city is larger and much more developed in the sense that there are more buildings and roads in the city. In walking through the city, it wasn’t as clean or maintained as well as Barbados.

Out of all the islands we had visited during this trip, it was probably the poorest this was probably the most indigent. That’s not to say the island doesn’t have some expensive resorts (such as Beaches, which you see advertised on TV all the time). There’s a visibly large economic gap on many parts of the island. As the island depends on tourism, they really welcome the ships that stop each day. So much so, that you will be bombarded by tour operators and vendors as you exit the terminal. 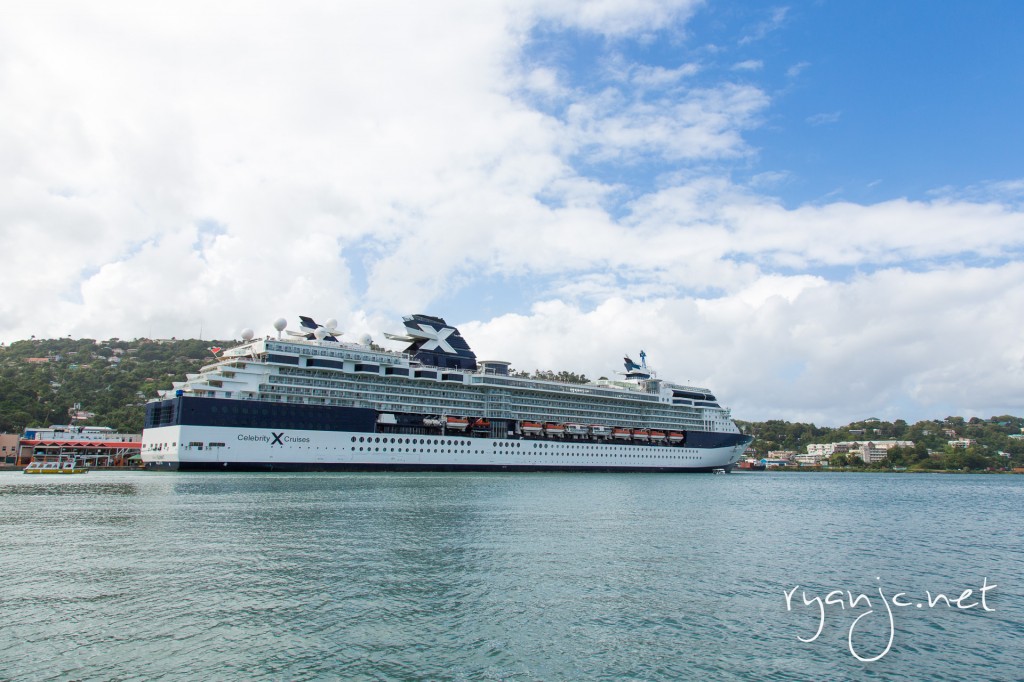 Our excursion for the day was in the afternoon so we spent the morning walking to the nearby Vigie Beach. It’s the closest beach to the cruise terminal, well within walking distance (about 20-30 minutes). It would be much closer were it not for an airport situated parallel to the beach that you have to walk all the way around. The walk takes you through the city, along the terminals where the ships dock, and past the airport. Not all the sidewalks are well paved, so watch your step. 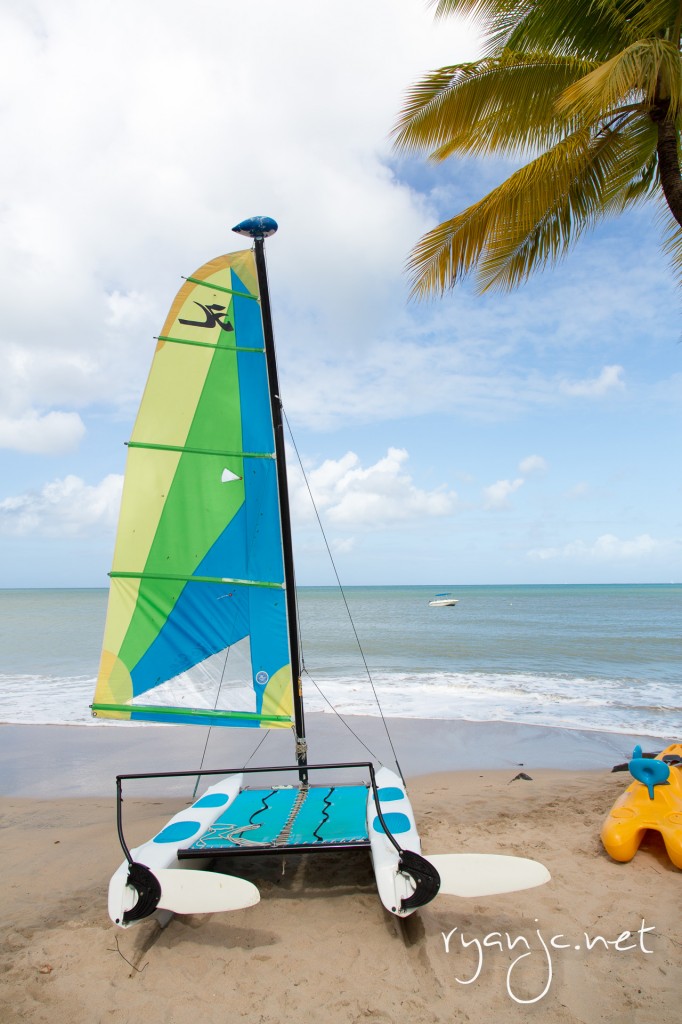 Vigie Beach may be the closest, but it’s probably not worth going to unless you’re short on time. The only thing to be found on the beach is the Rendezvous couples resort (which goes for $800+ a night) and a cemetery. Walking along the beach and accidentally through the beach in front of the resort, we were shooed off by an unfriendly security guard. I suppose the beach is swimmable, but it’s quite rough as it faces north, towards the open water. There’s not much sand to enjoy either. On the opposite end of the resort sits the cemetery. There were locals cleaning the cemetery and sweeping the beach. They did a great job of keeping it clean and free of litter, leaves, and seaweed. One gentleman waved us welcome into the cemetery with his large machete as he saw us looking. We politely declined and kept walking, a bit faster than we had before. 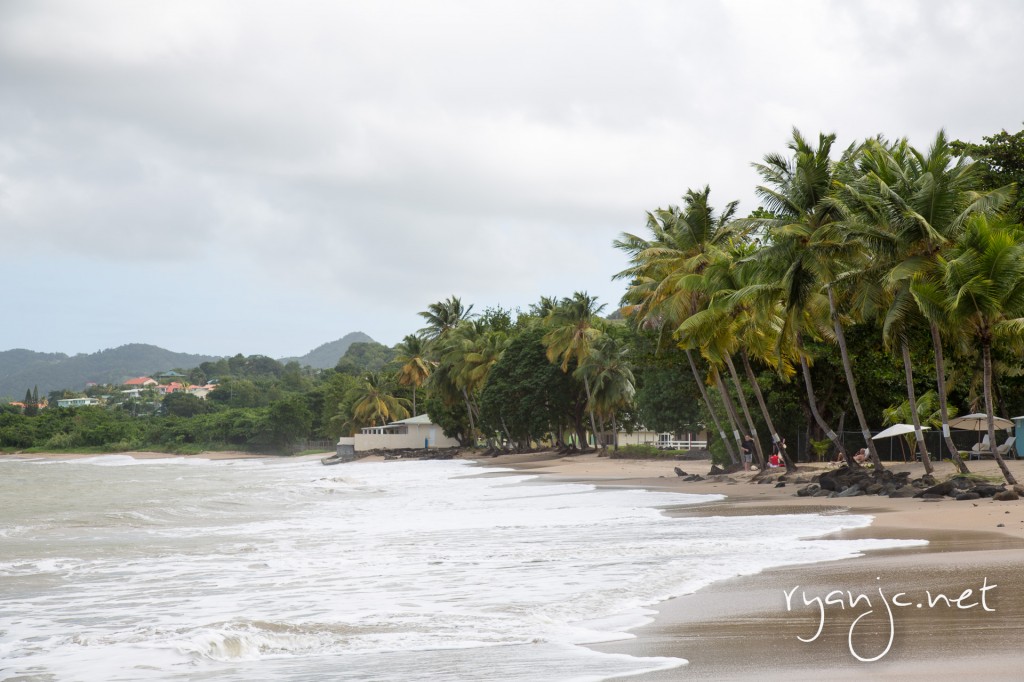 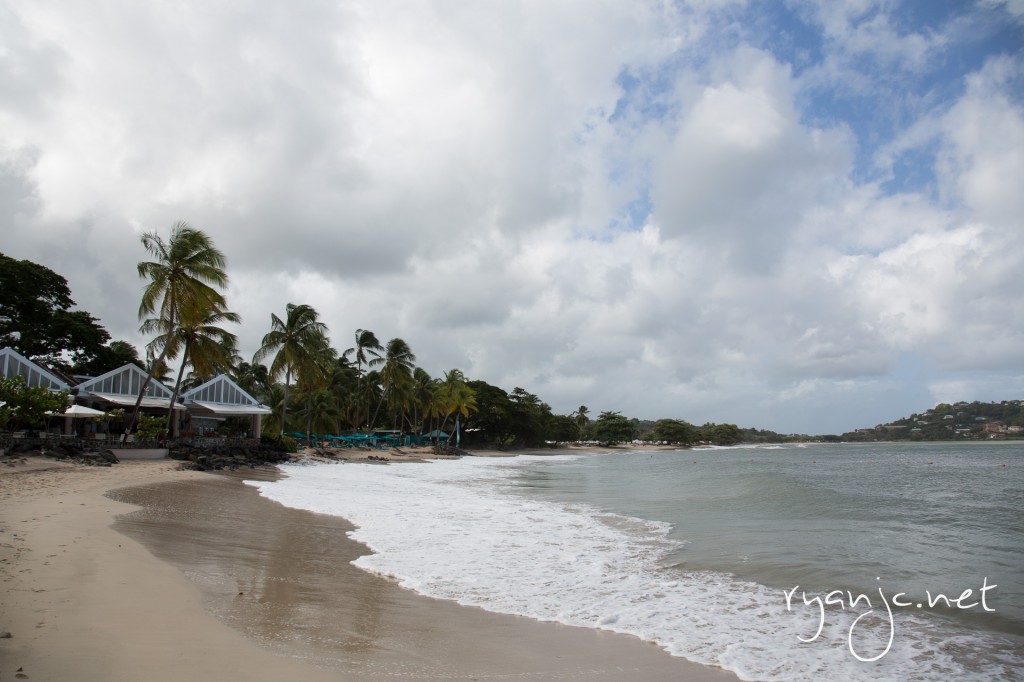 Once we made it to the end of the beach, we were very underwhelmed and caught a taxi from the airport back towards the city. We got off at the Basilica of the Immaculate Conception. It’s the largest church in the entire Caribbean and the second highest ranked attraction on TripAdvisor. It’s a beautiful cathedral decked out in all sorts of wood. Unlike all the churches in Europe, this one has no stone or granite, just elaborate rich wood decorations. 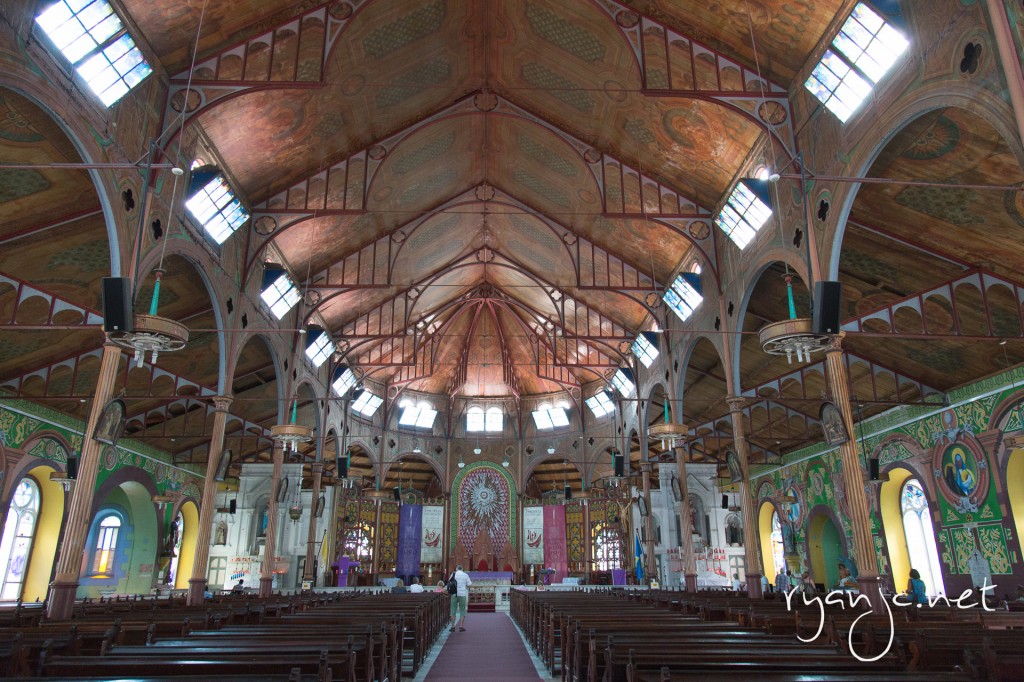 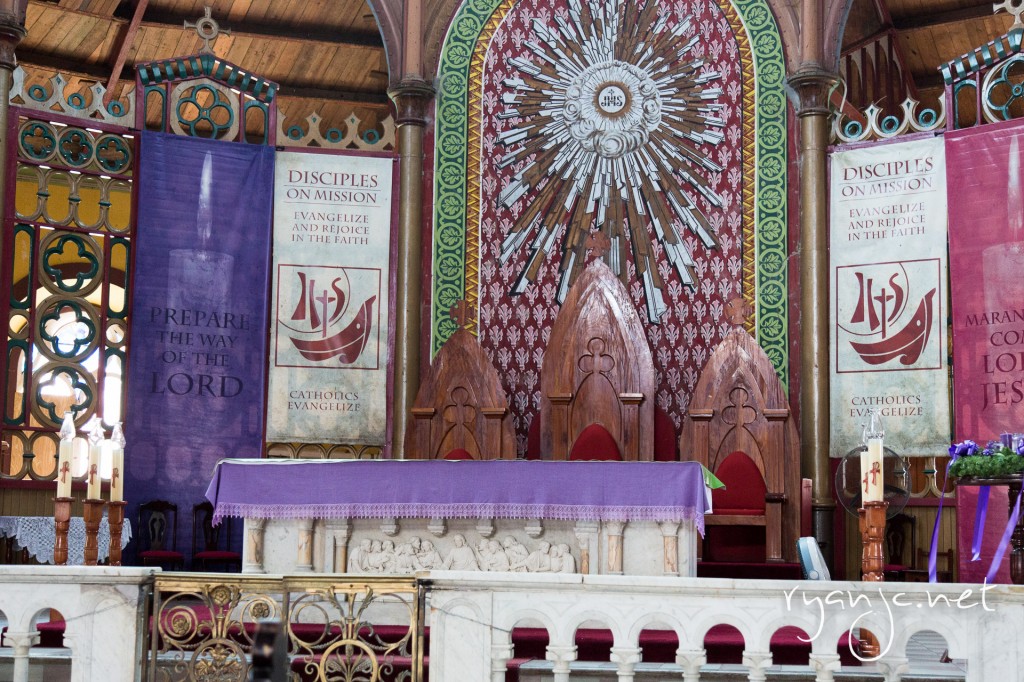 As we were leaving the cathedral, it started to rain, so we hurried back to the ship to find something to eat for lunch before we had to meet our tour. By the time we got back to the ship, it had started pouring. The skies had opened up. You couldn’t even see the city anymore through the dense rain. About twenty minutes later, the rain stopped and the skies slowly parted as sunlight peered through the clouds.

It was very difficult to find something to eat from about 11:30 AM to 12:15 when we were supposed to be downstairs to meet. It’s the time on the ship that they are transitioning from breakfast to lunch and nothing seemed to be open. The burger grill had a line of hungry passengers and they were slowly setting up all the meats, toppings, and firing up the grills. We relented and got in line for whatever they had. As we were eating, real food slowly appeared at the buffet and I managed another few plates to complete my meal.

The tour we chose was snorkeling under the Pitons at Pitons Bay, home of the two famous volcanic formations in St. Lucia. They are volcanic plugs; lava has filled and sealed the vents. The each rise about 2300 feet (700ish meters). It was really neat to swim in a marine reserve directly between the two pitons. The rocky beach is very secluded and roped off to protect the marine life. There were finally plenty of fish and coral to enjoy. They aren’t the most colorful and the water isn’t the clearest, but there are some unique coral formations fish to be seen. 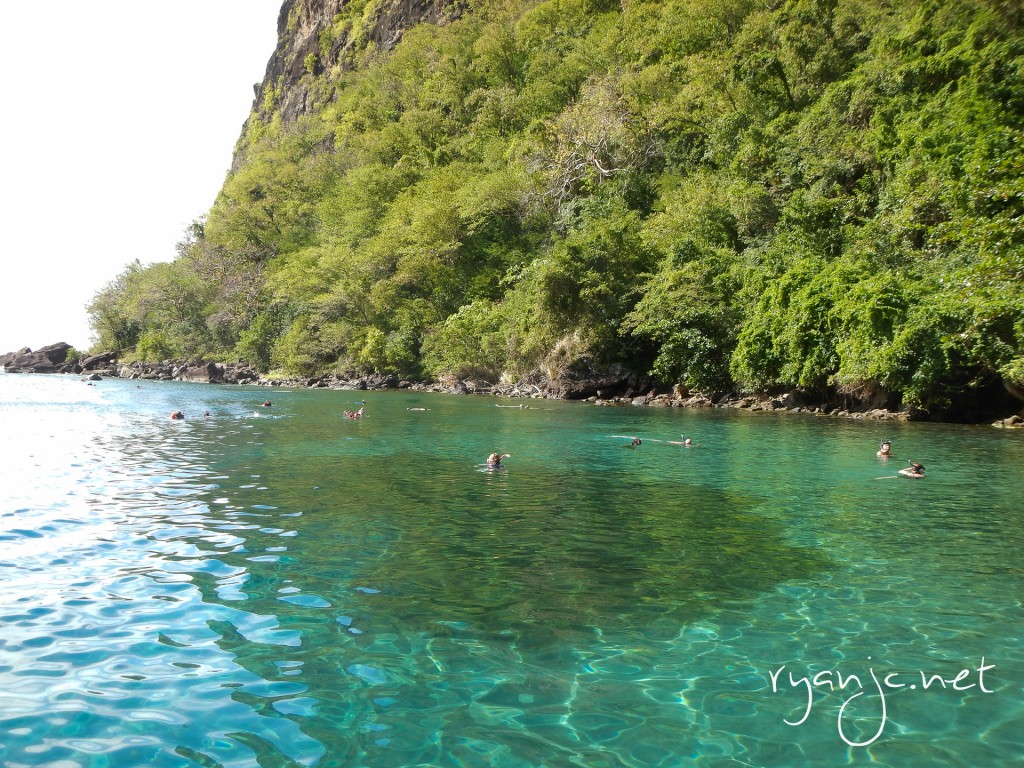 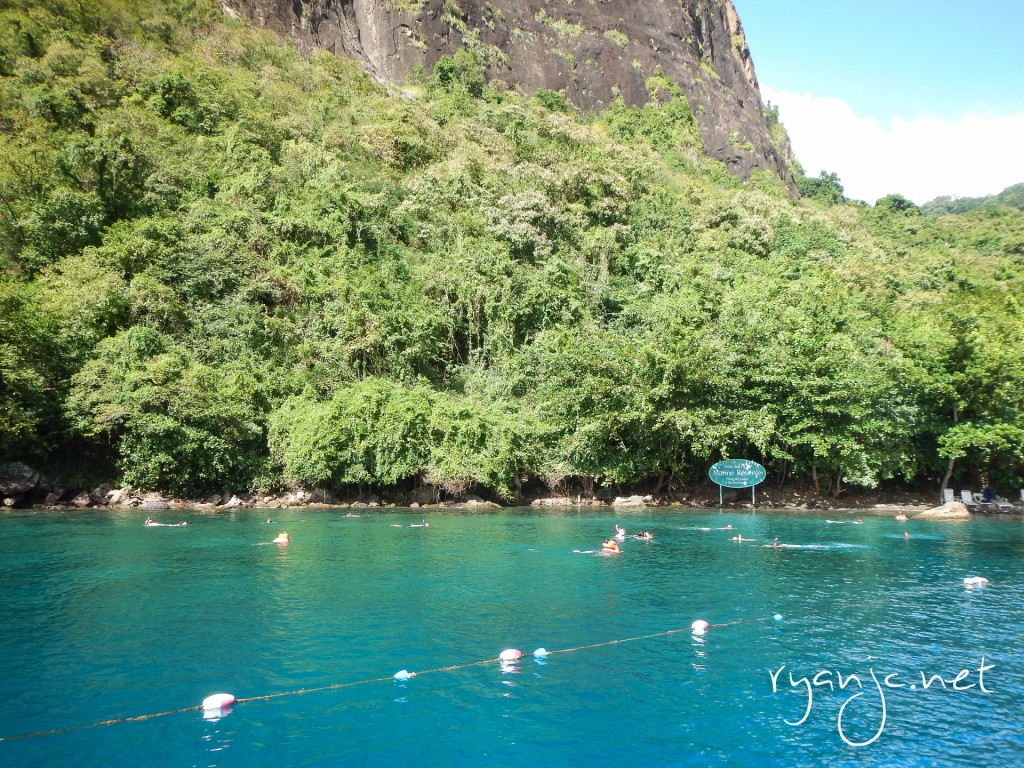 On the half hour boat trip to and from the Pitons, it must have rained on and off four or five times. Luckily when we got to beach, it didn’t rain a drop.

All in all, an adventurous fun day in the water, sun, rain, beach, and everything in between!

One thought on “To the next: Castries, St. Lucia”