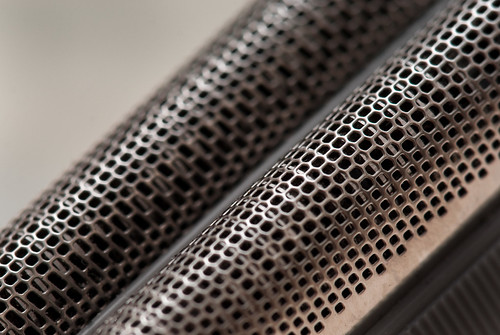 This is for Macro Monday‘s weekly theme of "smaller than a penny." I thought the repeating patterns and small holes would make for an interesting more abstract macro.

Thank you everyone for the kind words from yesterday. I did have a long day trying to recall everything from the early days gen chem, but I finally got through stoichiometry.

On another note, Sony released three new dSLRs today, the A230, A330, and A380 to replace the A200, A300, and A350 respectively. I’m all for the new features which include a smaller, lighter design, simplified buttons and help menus (good and bad since it has decreased some functions), new improved kit lens, SD memory card compatibility, and the price (significantly cheaper than the Canon Rebel T1i and Nikon D5000). Things that don’t really impress me is the need to have 3 low end introductory cameras (really Sony, three?), the lack of HD video (Sony the Blu-Ray pioneer), new battery, weakened flash (I think it lacks wireless compatibility), and the lack of a wired external shutter remote release. It also seems hardly anything has changed since the previous (my) generation. 1 year later and Sony has hardly done any internal upgrading. I guess you could say they’re laying this one on the line, cutting it close with the new models. I’m pretty sure they can attract new SLR users by making their cameras very P&Sish but it also leaves existing users like me who wouldn’t upgrade to the A700 because it’s at the end of its cycle and these new cameras are the same. I hope the new A700 (+30?) will have a greatly improved sensor which can handle noise well, shoot 1080p HD video, and comes with an assortment of new lenses). Sony needs to refresh their semi-pro offering to build up the system and keep users.