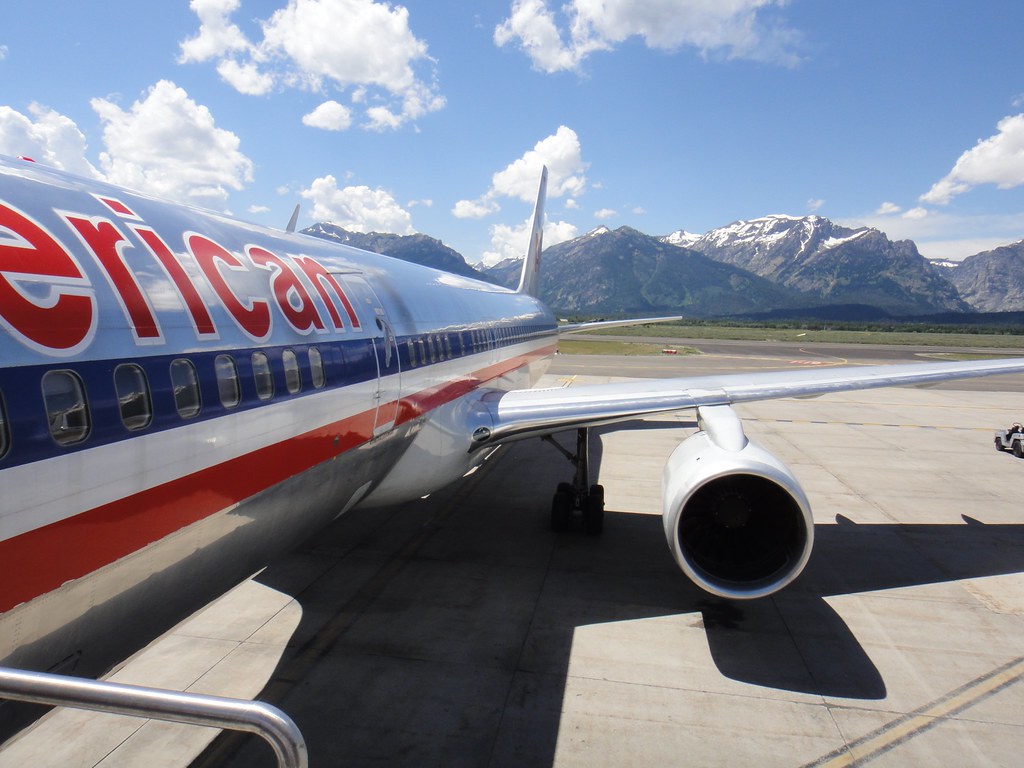 The flight this morning for Jackson Hole, Wyoming left the gate on time which was nice. As we were taxing out to the runway the captain came on and said there was a problem with an instrument panel and we had to return to the gate. Ugh I thought. About 5 minutes back to the gate, the captain came back on and announced that they had fixed it. I can just see the captain and copilot just banging on the dashboard till it fixed itself (because that’s what guys do). After an hour long delay, we were off.

During the flight, I was able to watch one and a half episodes of Castle, a new TV show I just started watching. During the flight, the lady next to me started painting her nails. Really? You couldn’t do that the night before or later at the hotel? You can just imagine the noatril-singing smell that just kept circulating over and over. Yummy.

As we were approaching Jackson, mountain started creeping up on the horizon and it started getting bumpy. As we were landing, I looked out the window and saw the Tetons to my right. Wow they were really tall and we were coming in right next to them! After we landed we deplaned on the tarmac. The mountain air was so crisp and fresh and it was beautiful. It was unbelievable landing and coming off so close to the Tetons.

After collecting our bags, we headed to the hotel. Our “mid-sized” Carolla car rental was upgraded to a Prius! I have never been in one before but it’s a pretty cool little car. It’s loaded with features and high tech display HUDs for battery read outs, power consumption, mileage, and fuel economy. It starts with a push of a button and it’s dead silent, like a golf cart. Step on the gas, and the motor propels you instantly forward, like a golf cart. When your climbing or really accelerating, the engine kicks in and you can hear that humming along. To park, you simply press the park button, instead of shifting a gear, and press the power button to turn it off. Another cool feature is the regenerative braking which charges up the battery when you brake. 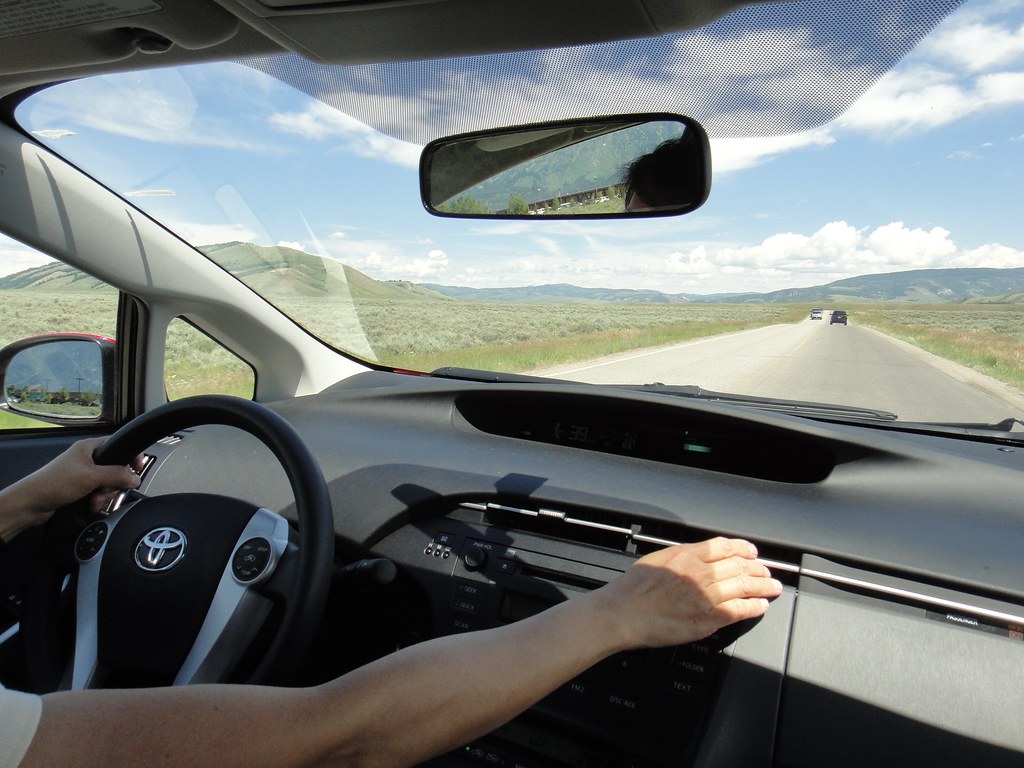 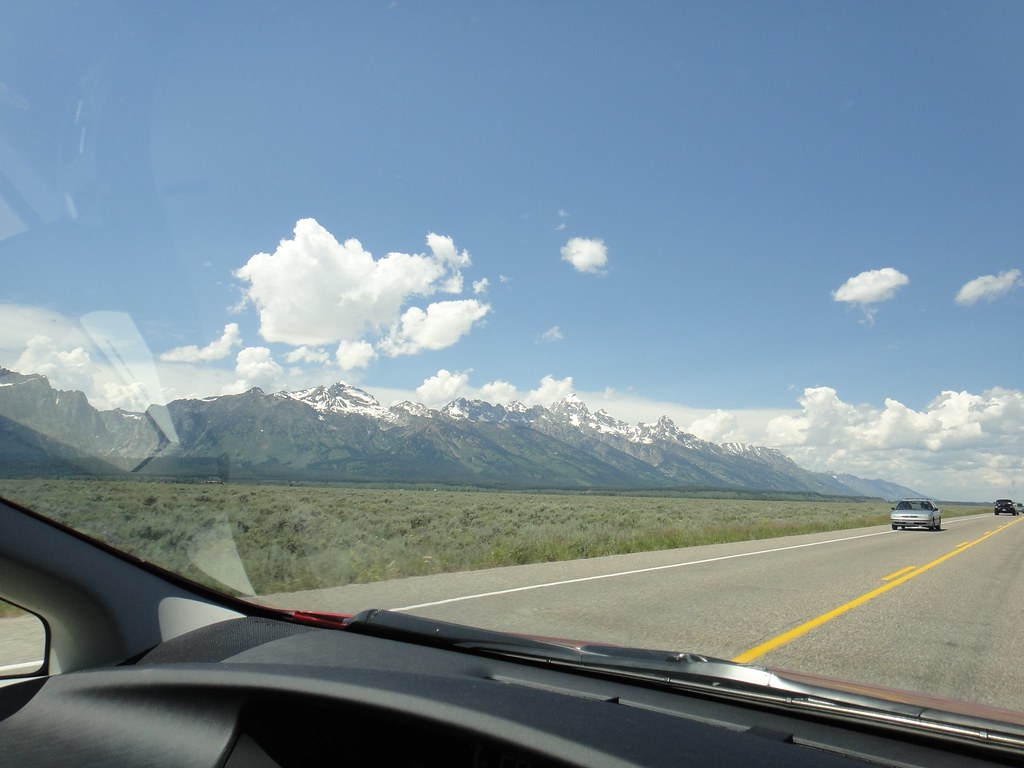 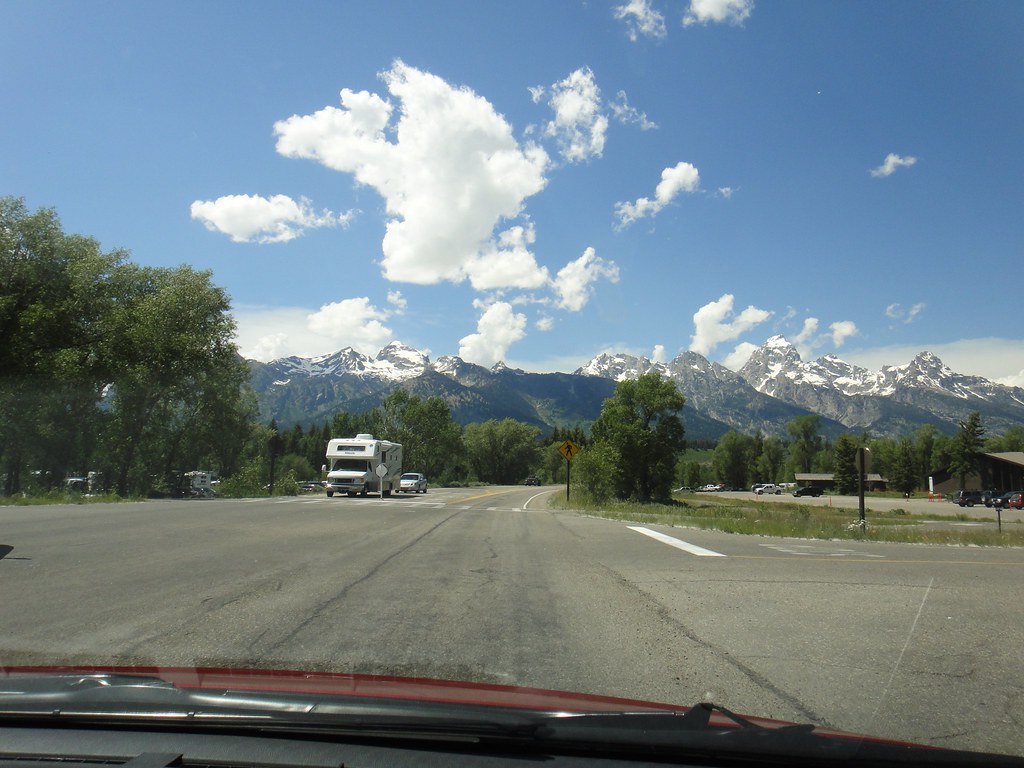 About to turn off to Moose-Wilson Rd. 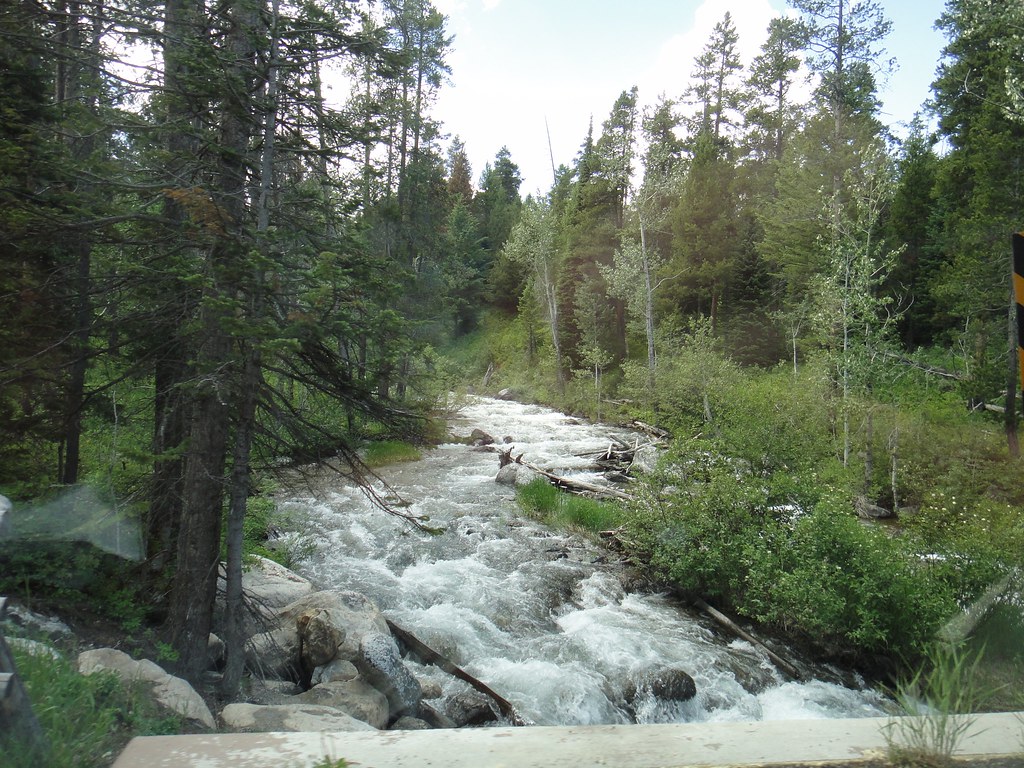 Waterfall on the side of the road. 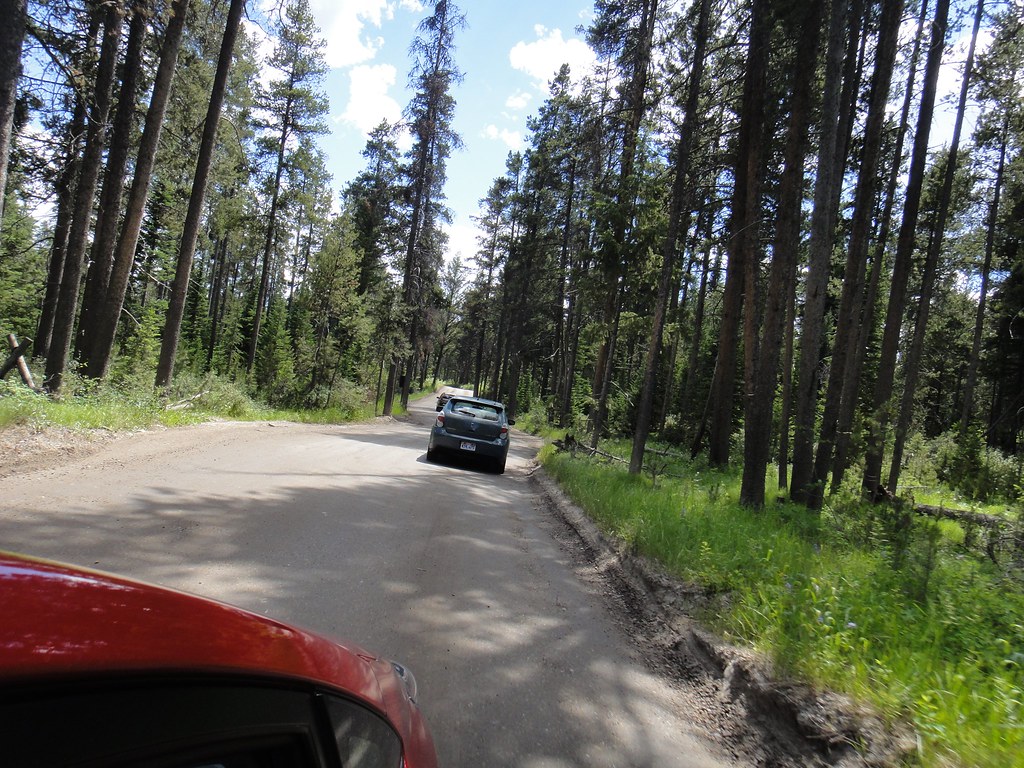 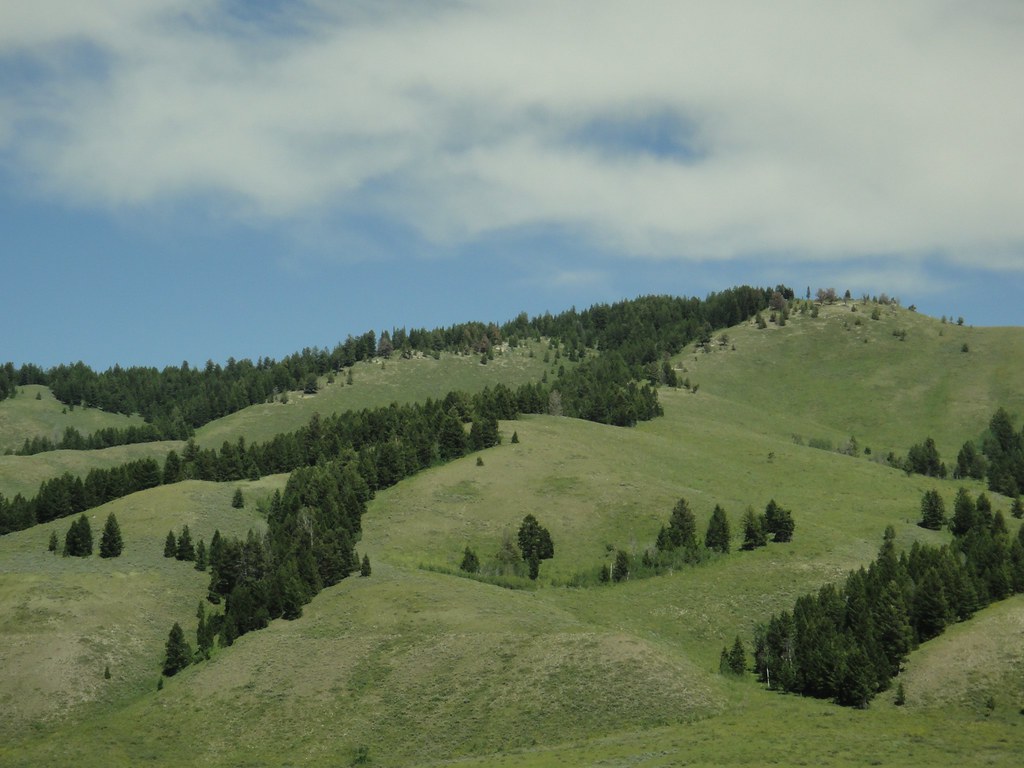 After checking in, getting our room, we dropped off our bags and headed into town to fins something to eat, look at some photographer’s galleries, and find the church.

The first gallery we saw was Images of Nature by Thomas Mangelsen. He’s got some incredible wildlife images from all over the world, US, Canada, Africa, and India. He also has some nice large sweeping landscapes from all over. The next gallery we saw was David Brookover who specializes in “grandiose” lanscapes. His pictures are so impressive that even something as large as maybe 6 by 8 feet retains so much detail in the leaves and flowers. David uses a large format 8×10″ film camera to produce these unreal results. Film of that size doesn’t even begin to compare to modern digital SLRs in terms of resolution.

After that we had a quick bite to eat, a coconut lemon bar and it was off to of the Mountains Catholic Church. The church is beautiful. It’s situated at the base of the mountains and has a bunch of wood inside. As they were starting, they welcomed us to their service and I thought to myself, service, which he later corrected as Eucharistic service, hmmm this is a Catholic mass right? But yeah, it was, the one and only! 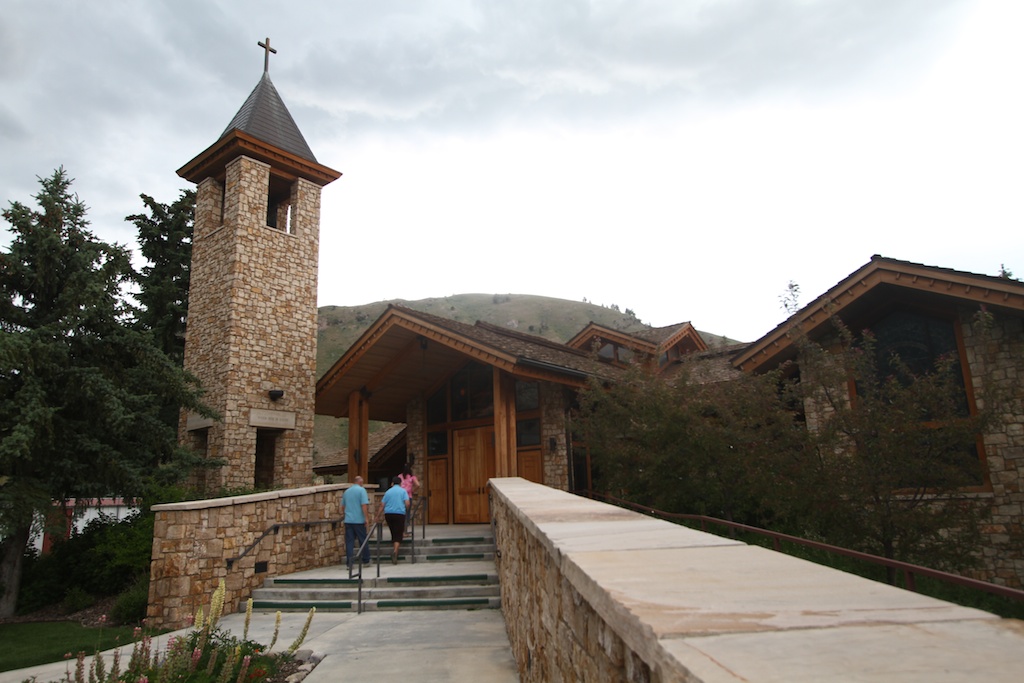 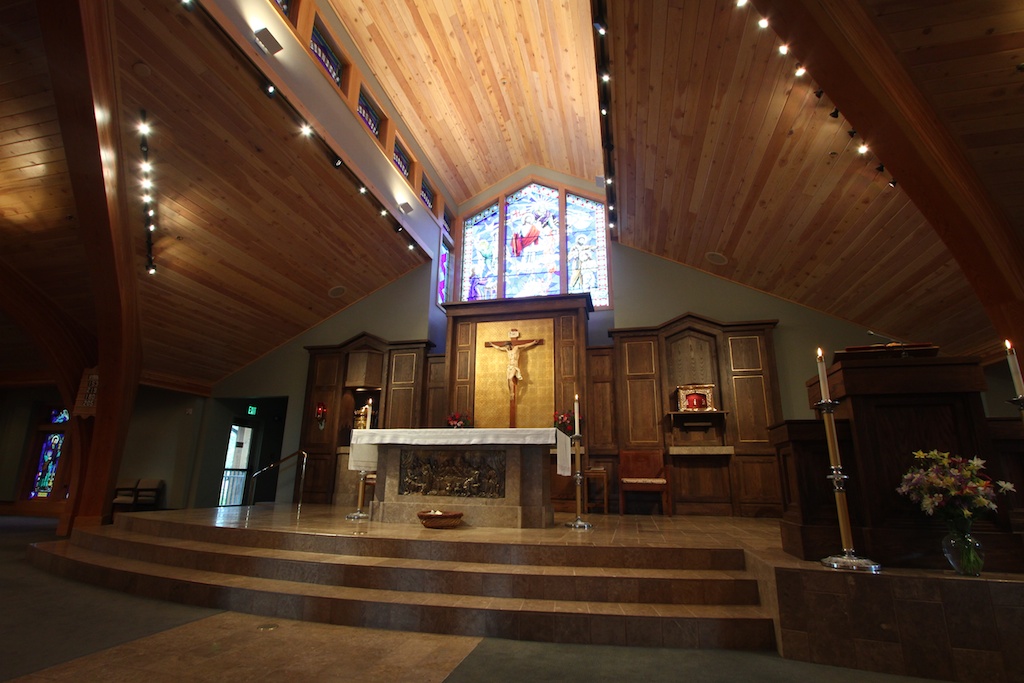 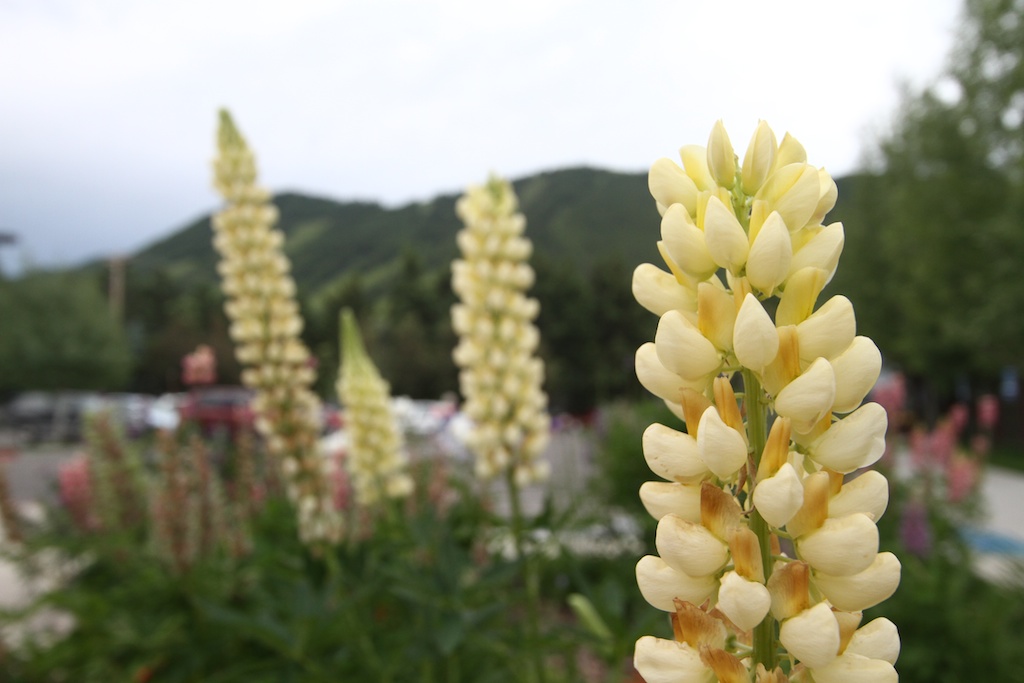 At church, the homily over The Good Samaritan was excellent. I haven’t heard such an enthusiastic priest in a while. It’s just so neat to have the same readings all around the world, universal.

During church, it poured heavily and then after church was cloudy and began to clear up. Later we would learn that storms often build up in the afternoon, release their fury and move on, leaving a clear night.

Next, we walked around Jackson and came upon a gallery by local Henry Holdsworth who had a bunch of Tetons, Yellowstone landscape and wildlife pictures. Talking with his assistant, I got some tips of some good places to shoot.

Around Jackson, we came across town square. In the middle of square is a small park with 4 entrances gated with large antler horns. Its pretty cool looking up close. 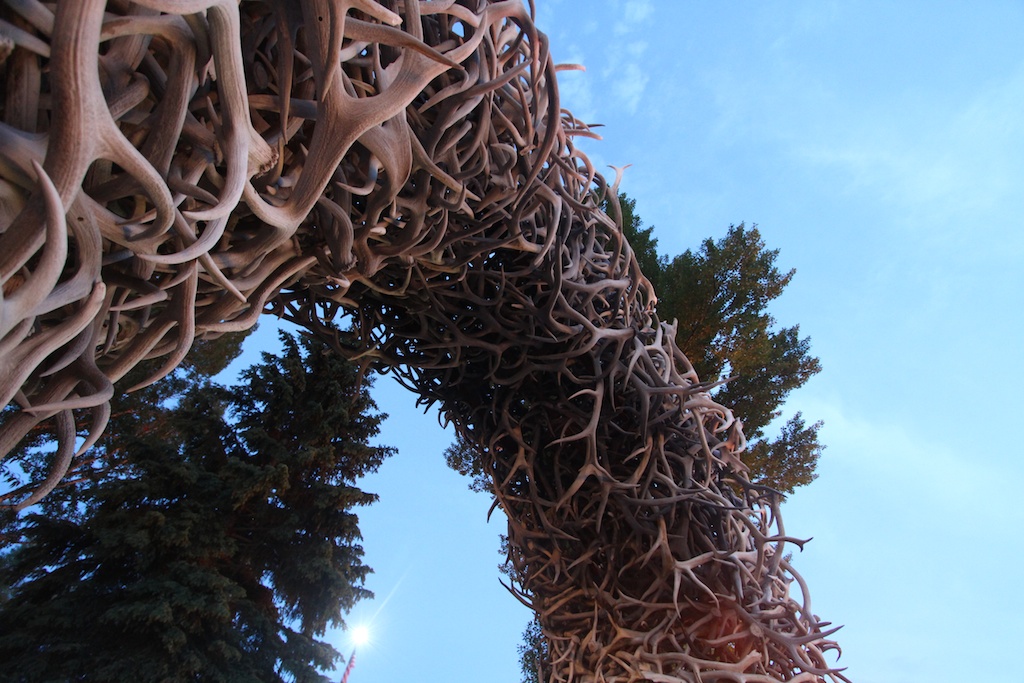 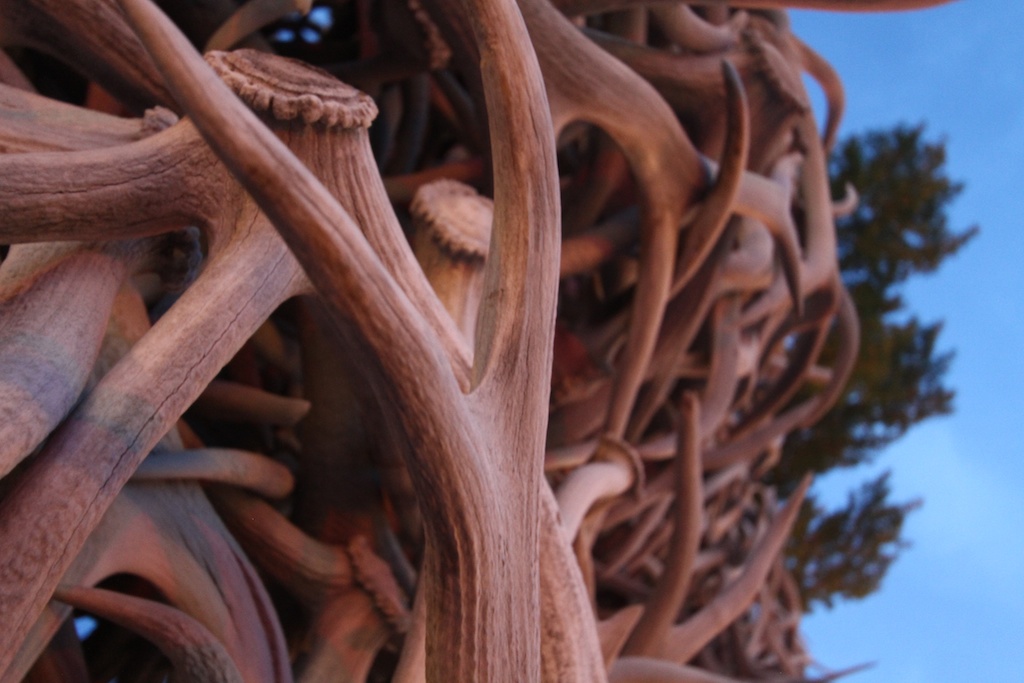 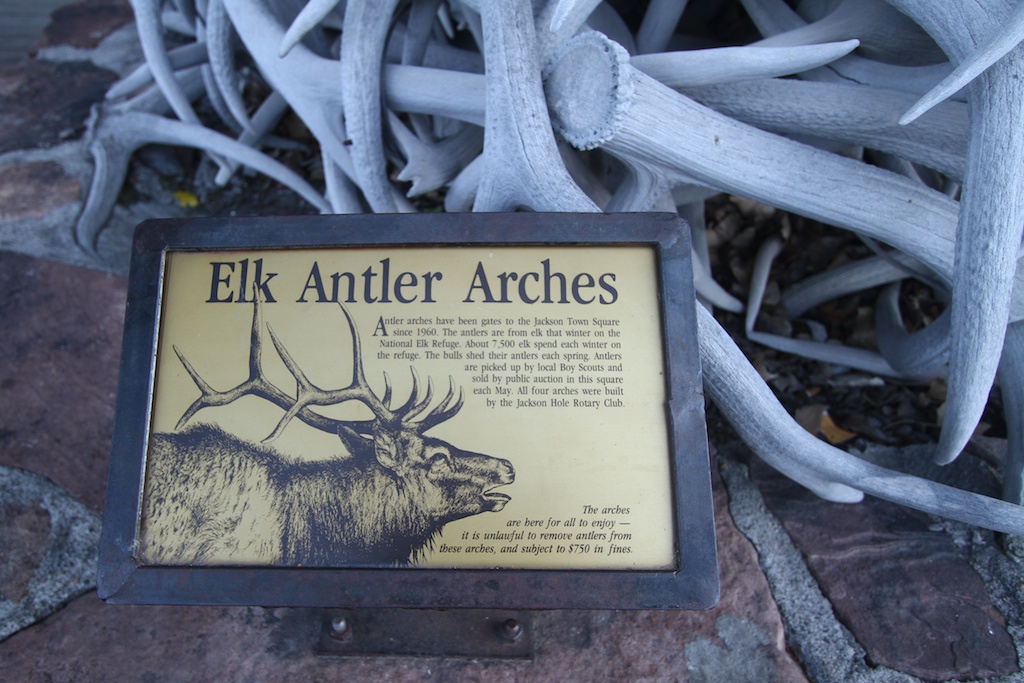 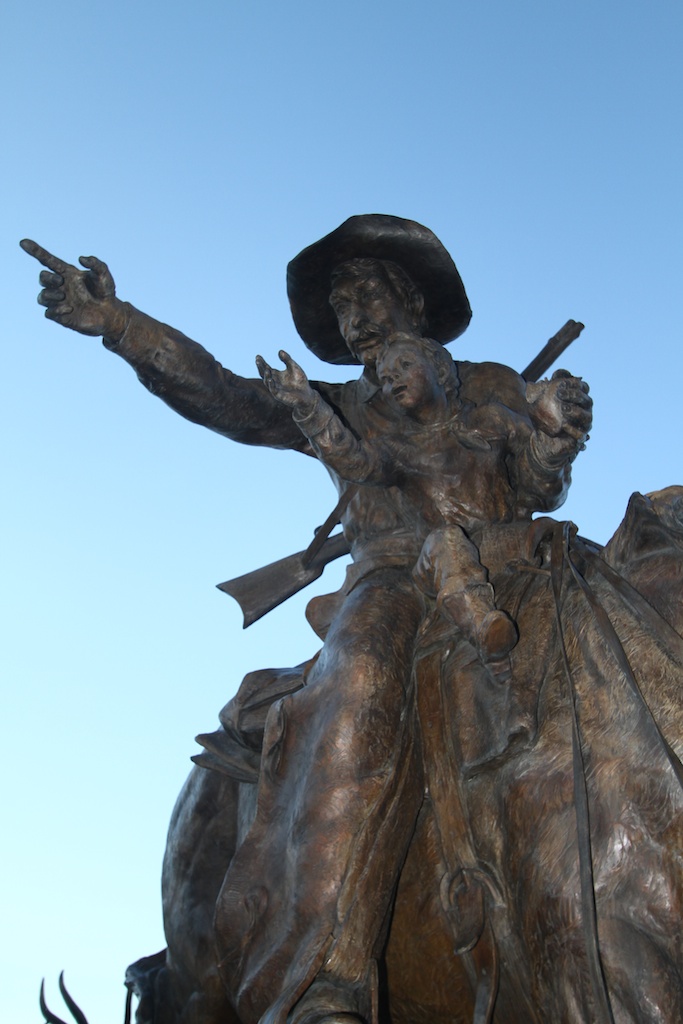 By this time we were starving and looked up this place for dinner called Teton Thai. It’s this highly rated outdoor restaurant that is probably like something you’d find in Thailand and many parts of Asia. As usual, I got the pad thai and Tom ka gai (coconut chicken soup). It was really good. I’m sure part of that was I was really hungry, but also it was very authentic and just yummy. Walking back to our car, I couldn’t help but notice where our car was parked and how pretty it looked, so I couldn’t help myself when I took these. 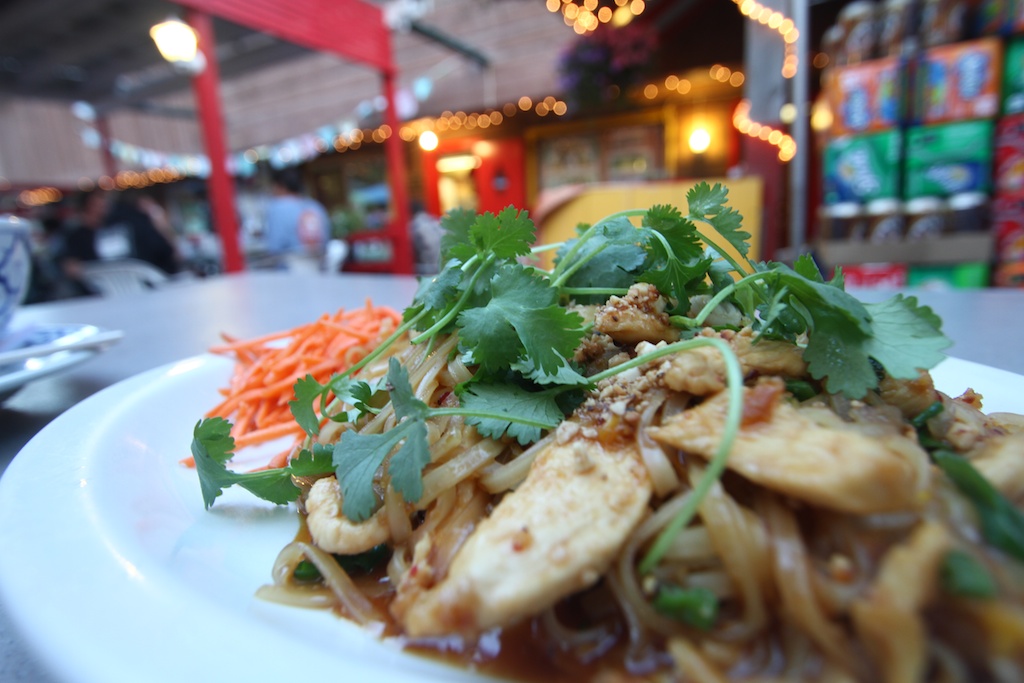 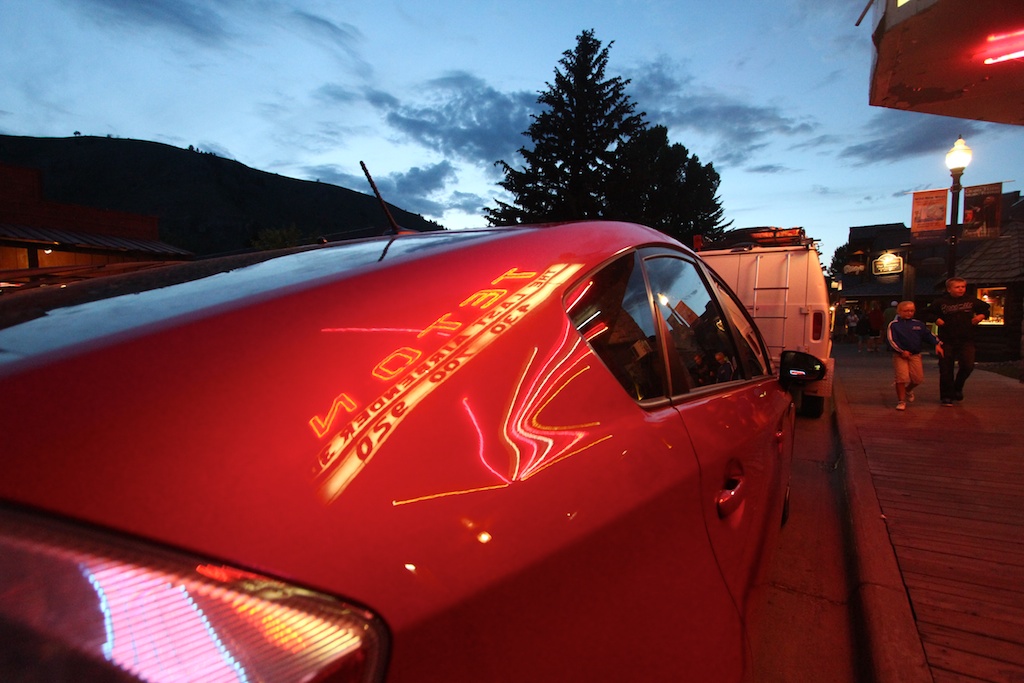 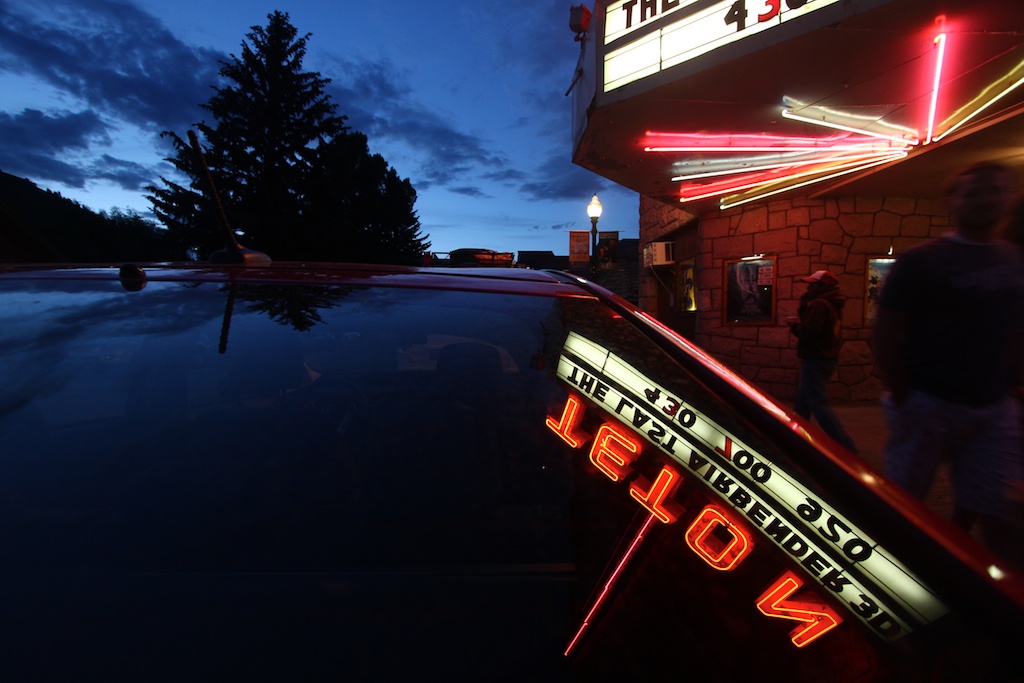 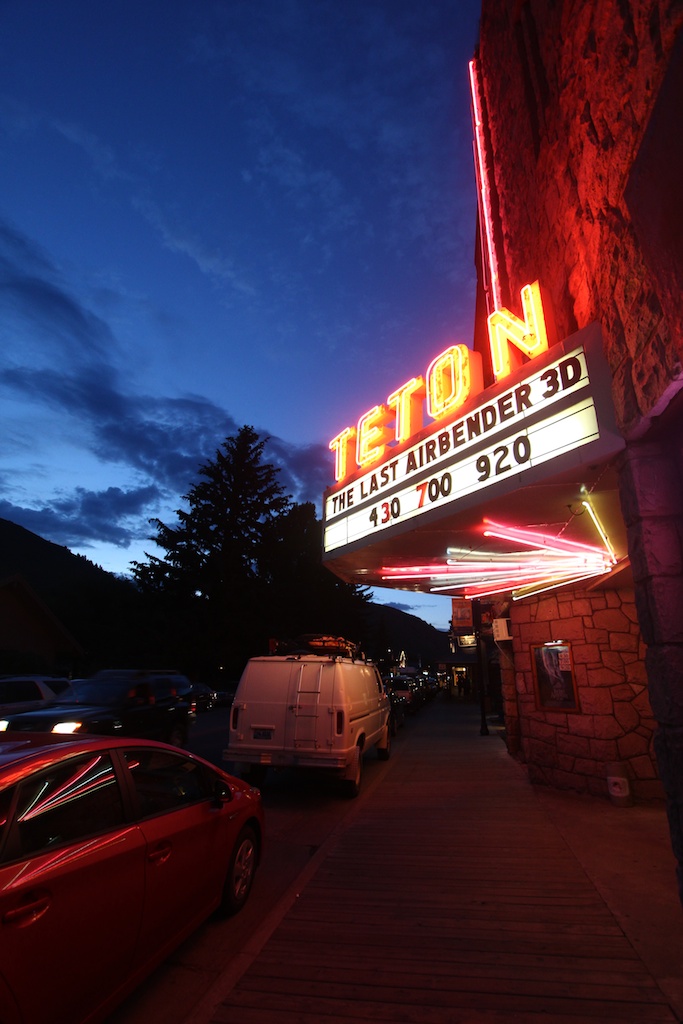 After dinner, we drove down to the local Albertson’s to get some necessary groceries, food, and a forgotten toothbrush (in my defense, I brought the holder but just forgot to stick my toothbrush in it). As it turns out, this Albertsons is the largest selling store in the nation by a wide margin. And it shows, the store is huge and well stocked for anything a tourist or  local would need. It’s surprising that they don’t have a Walmart here. I can see that bringing in lots of business.

After we got what we needed, it was back to the hotel to sleep. The next day was a long drive out of Jackson north into Yellowstone (Old Faithful and the geysers). 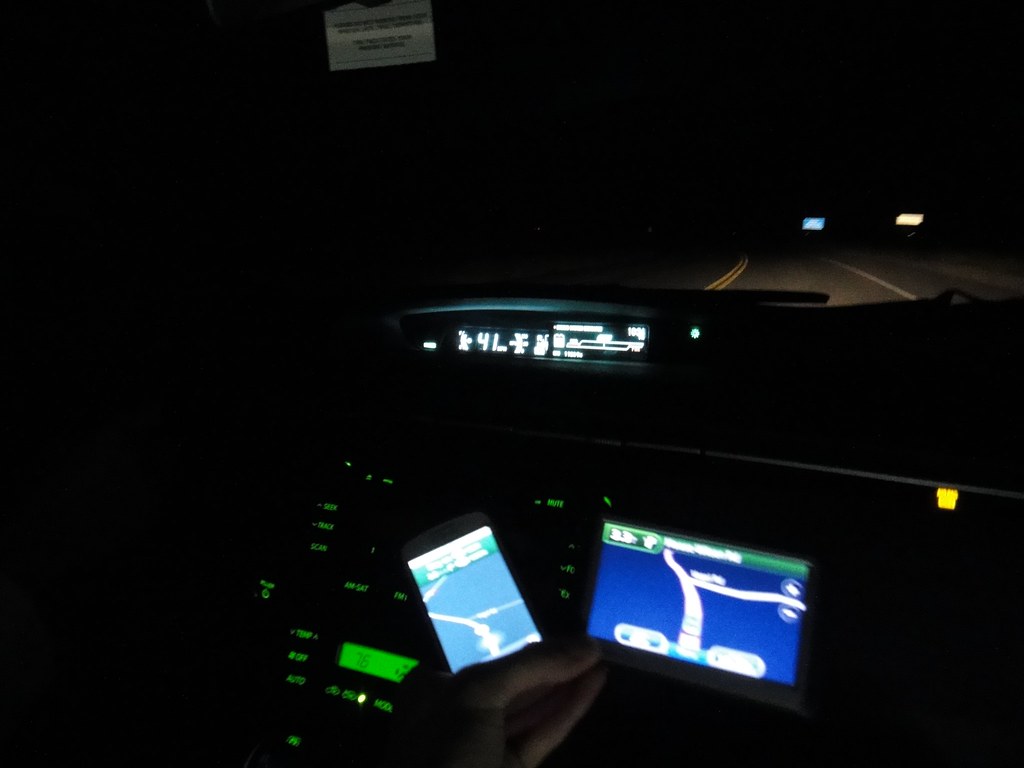 Just to make doubly sure we didn’t get lost in the darkness going back to the hotel! LOL. 😀 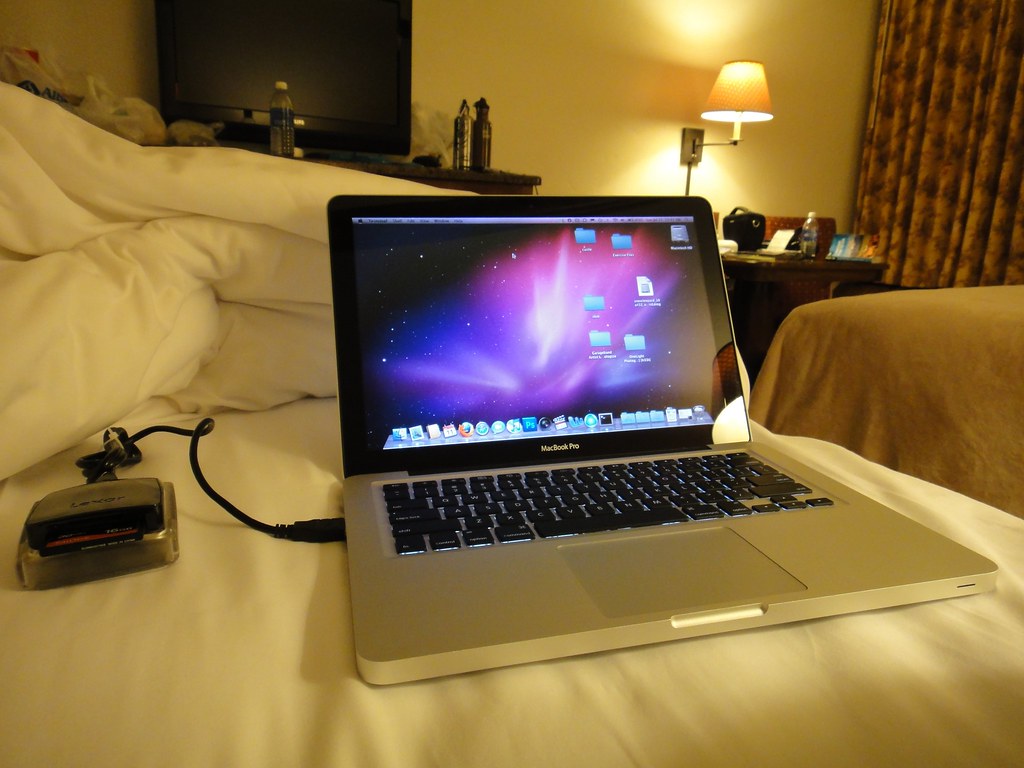 The recurring scene every night (or morning) where I would download my pictures and back them up to an external hard drive.

Posted from WordPress for Android

One thought on “Wyoming Day 1 (We Have Arrived!)”