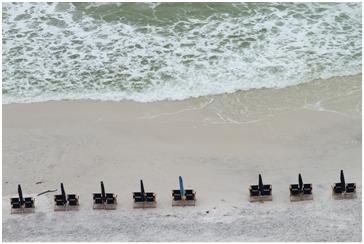 I went to bed after midnight the previous night but managed to get up at 8. Church was at 10:30 and I wanted to leave time for breakfast at Donut Hole. So after, I got up, I did my usual routine of checking the internets to see what I missed from the day before. As it turned out, the best place to get reception was on the balcony. Works for me! It was a beautiful day outside. A bit windy and cloudy (actually quite cloudy with big dark clouds). The waves were surprisingly loud but very pleasing. It’s something I would never get tired of hearing. It’s great too because day or night, there’s waves, it’s not like birds where they quit chirping at night (mostly). I could definitely get used to working on the balcony at the beach. Too bad all good things must come to an end. But for the week, it was mine to enjoy! 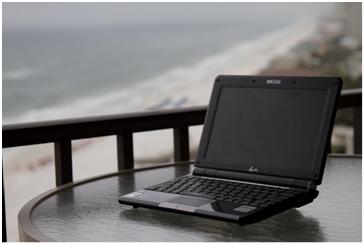 Could get used to this! 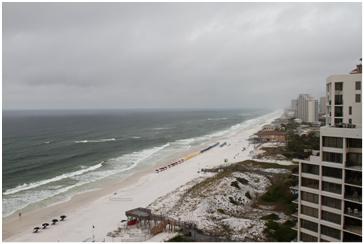 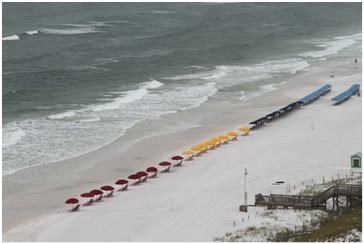 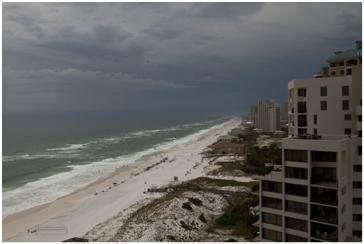 After some light browsing, we headed to Donut Hole which was just down the street. Actually everything is just “down the street” in Destin. There’s one main highway (98) that spans the entire region with the Gulf to the south and the Bay to the north so things are easy to find and get to. When we pulled into the parking lot, it was jam packed! The line was way out the door into the parking lot. Somehow, we managed to find a spot at the door, but there was no chance we could get a table before church so we just grabbed a couple donuts and headed back to the Condo. I got my favorite donut, an old fashion glazed donut which has a cakey dough instead of a light Krispy Kreme interior. This donut was even better than all the ones in Tim Horton’s up in Canada.

So at The Church of the Resurrection, we were just barely on time, perhaps a minute late. But being so close to the beach and having a lot of tourists, they seemed pretty chill and turns out we were right on time and had a couple of minutes to spare. The church is very close to our Condo and only maybe 5 minutes away. It’s sort of hidden on a small road and is surrounded by trees. The building is this gorgeous massive dome-shaped structure and it’s circular inside with the alter at the middle. The mass that Sunday was for the Ascension which was moved from that Thursday. That’s one of the things I love about being Catholic, it’s universal. Everyone hears the same readings and we celebrate the same Feast days all around the world. After mass, there was an announcement. The priest was celebrating his 50th birthday and the deacon his 25th year (I believe) as deacon. To celebrate, two large cakes were brought out and the served cake and juice after mass! How cool. Get to have my cake and eat it….. and I love cake. 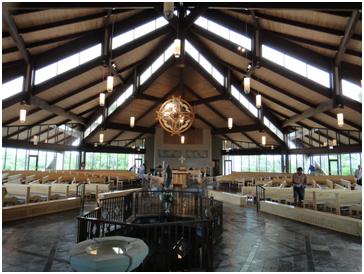 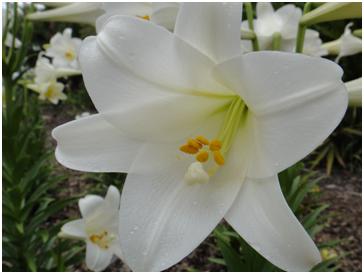 After mass, we went to eat brunch at a place called Callahan’s. They supposedly have good crab cake brunches, but on Sundays they have a special Sunday brunch menu, which didn’t have it. They did however had some delicious sounding omelets and I chose the steak one with an English muffin and potatoes. Other than the steak inside being a bit salty (but it did add a lot of flavor), it was all really good! And the service was excellent. If you like breakfasts, the Destin area is the place to go. There are so many awesome places to have breakfast and Sunday Brunch. 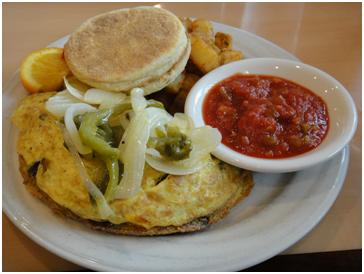 After lunch (brunch), we went a little further down the street to Sexton’s, the number one seafood market in the area (yes, better than Destin Ice). On $5.95/pound special were 8-12 count jumbo, freshly-caught Gulf shrimp. We bought two pounds along with some cocktail sauce. It would be part of our lunch the next day. Then we started heading back down the road towards our condo and stopped at Walmart to grab some milk, bread, cereal, sandwhich meat, chese, soap, you know the essentials. It’s nice having a Super Walmart so close. You can just buy everything you need and bring less. Actually, this was the very first Super Walmart I have been in. It was there before they all opened up everywhere in Dallas. Hard to imagine a time when Walmart didn’t sell groceries huh? Believe it or not, it’s still like that in Canada lol.

So after we got back to the condo, we headed down to the beach. It was still cloudy and stormy looking, but started to clear up in the evening. Since there was no sun, it wasn’t hot, just warm, windy, and humid. The waves were really getting kicked up from the wind and it made for a fun time at the beach. I had never seen waves quite like the ones that day. It was fun though since you could ride them on a boogey board, probably the next best thing I would imagine to actual surfing (something you definitely can’t do in the gulf since it’s normally so calm). 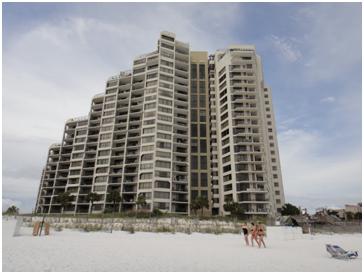 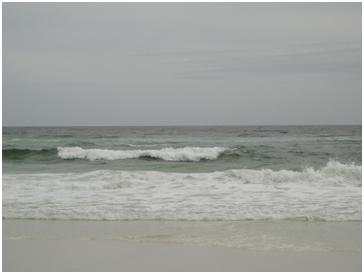 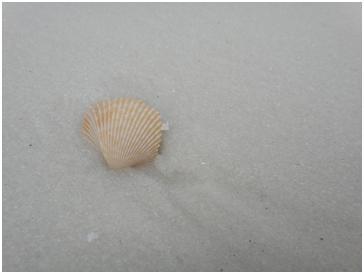 For dinner that evening, we went to Bayou Bill’s, a Cajun seafood restaurant (just down the street – a few miles). My dad got a towering bucket of seafood (crabs, clams, oysters, shrimp, corn cobs, and potatoes) and I got the fish of the day which happened to be grouper (hurray!). It was incredible! It was my favorite dinner of the trip. If I had known, I probably would have savored it more, but it was just too good. It was lightly fried, topped with peppers, onion, tomato (or are those carrots?), garlic, scallions (green onions), and mushrooms over rice with hush puppies (double yay!) on the side. 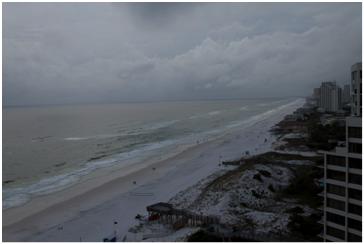 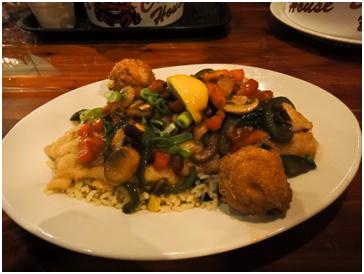 That night when we got back, I wanted to experiment with some long exposure pictures lit by the cloud-covered moon and lights along the beach. Here’s a couple that I got after a 2-3 minute exposure. 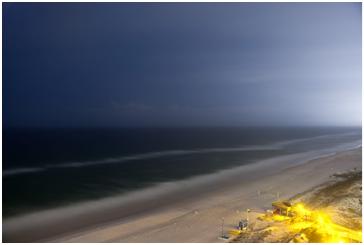 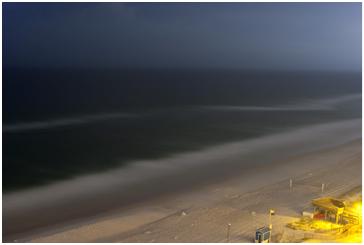 When I took this it was pitch black outside. Kind of eerie feeling with the water being so smooth.