Our second port of call on the Carnival Magic brought us to the largest city of Belize and the formal capital to British Honduras, Belize City. It is one of the few countries in the region that speak English as their official language. There’s also a mix of Creole and Spanish as well. In the days leading up to our disembarkation and tender to the Belize shoreline, we were a bit apprehensive about this port of call. We had heard various things from other passengers about this being a crappy, rundown, and potentially dangerous (beyond the immediate port) port. Unlike most stops, this port was too shallow for cruise ships to venture, so we had to anchor off shore and take tender boats to actually get into Belize and find a tour to join.

We woke up to another beautiful morning complete with a sunrise and a nice ocean breeze. We also had neighbors that morning, the Royal Caribbean Mariner of the Seas, also from Galveston on our same island route. It’s a really beautiful ship, especially on a backdrop of fluffy white clouds, blue sky, and turquoise waters.

We initially intended to book a tour with Carnival so that we could get an earlier tender off the ship (since they give priority to their own Carnival-booked tours) and be with a trusted operator that would get us back to the ship in time before the last tender. Unfortunately, by the time we tried to book, they were all full. We had done some prior research before docking so we knew some of the companies to look for and we knew we definitely wanted to go snorkeling and not cave tubing or sight seeing. The tour company we decided upon was Ecological Tours (Island Marketing if you book online) which owns a private island and beach called Goff’s Caye (pronounced “Key”). After waiting around in the heat of the city for a free boat to take us, we were finally back on the water leaving the city back towards the ocean, passed our cruise ship in search of greener waters. 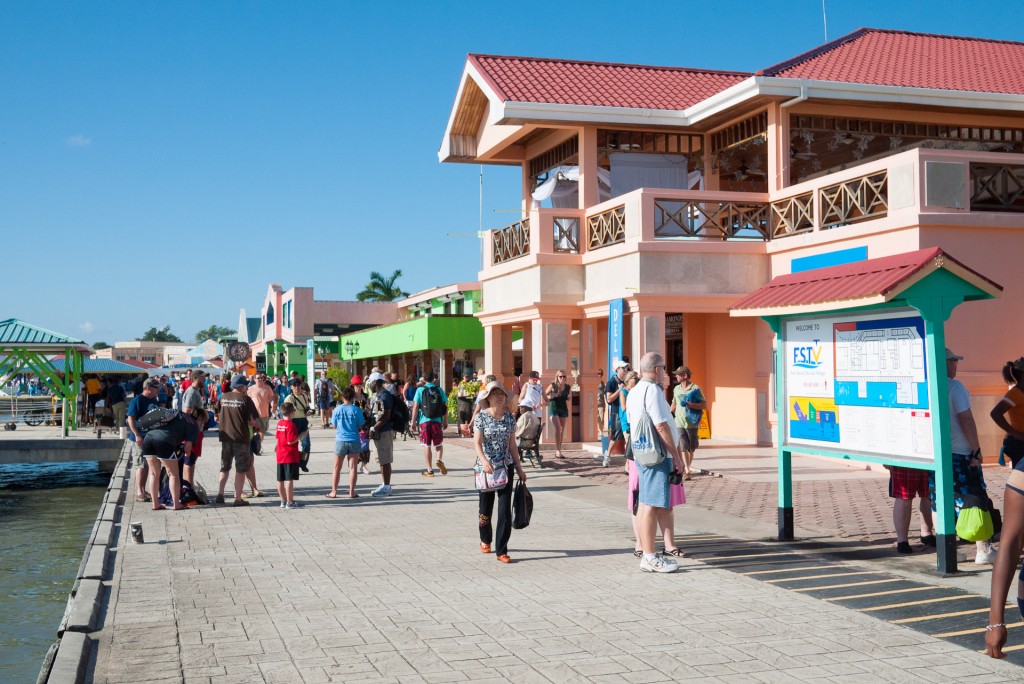 The Belize port is very small. Only a small stretch of shops line this gated-section of the port. It was advised to not go beyond the gates into the city itself although I heard many tourist who did and say it was not bad. It’s probably just not a place you want to hang around after dark.

Goff’s Caye is like an imaginary private island paradise, something out of a dream. The sunrise image at the top of this post is actually Goff’s Caye. We had sailed by it on the way into Belize and I didn’t even realize. I recall seeing it and thinking what if I was trapped on a tiny island such as that one like Robinson Crusoe. The island itself is only a little bigger than an acre and has several palm trees, white sand, and a small gazebo where fresh lobster is grilling over a pit of fire. I must’ve been too busy salivating over the lobster that I unfortunately don’t have any pictures of it to share. 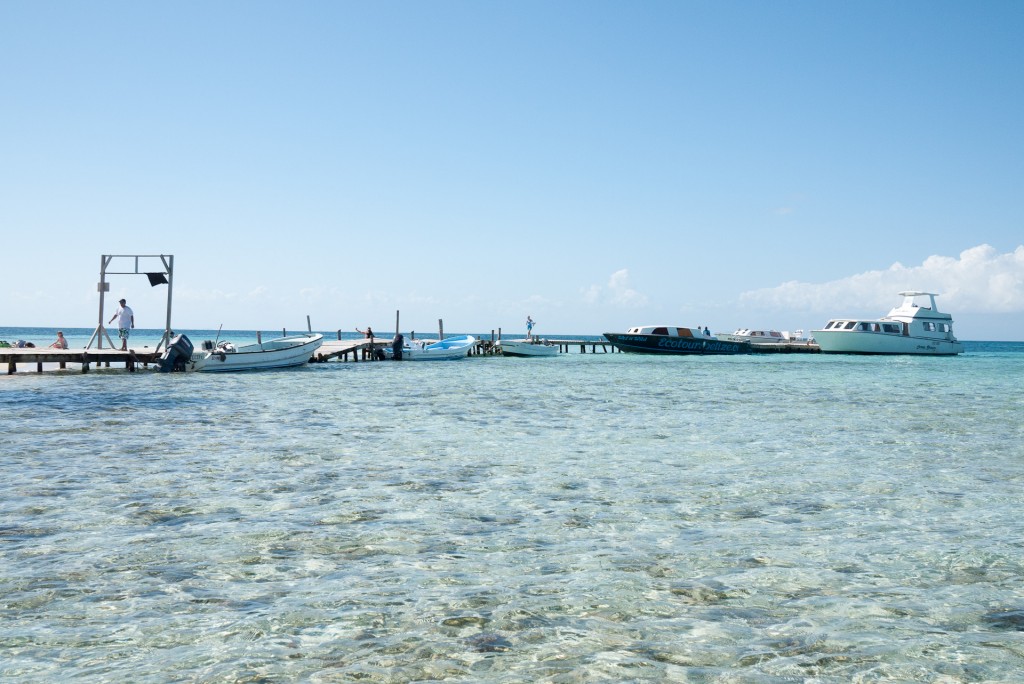 After getting briefly settled on the island, the boat was ready to take people out a few hundred yards to snorkel around the perimeter of the island where the reefs are located. After a brief training demo, we were off to explore the depths below. My only real prior experience with snorkeling was in Phuket Thailand, from the previous summer. This time we had longer to snorkel and had more freedom to swim around the perimeter of the island. I got to see more fish and coral reefs. The water was quite clear and the fish were plentiful. I have to say though that the one instance we had in Phuket yielded more colorful fishes and clearer waters. I also wish I had an underwater camera to share pictures, maybe next time! 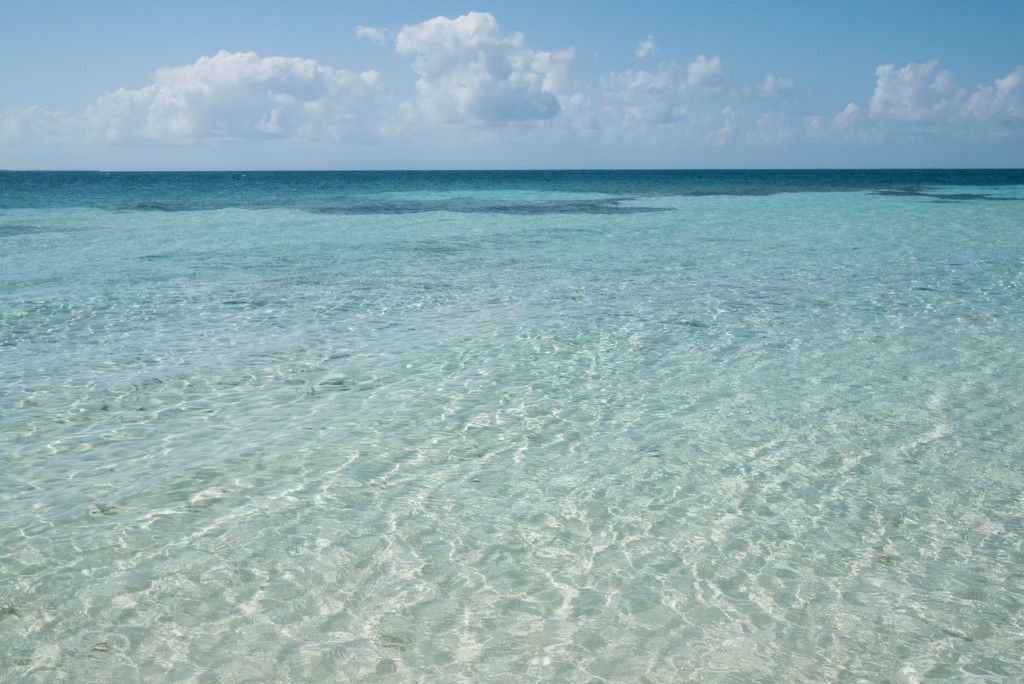 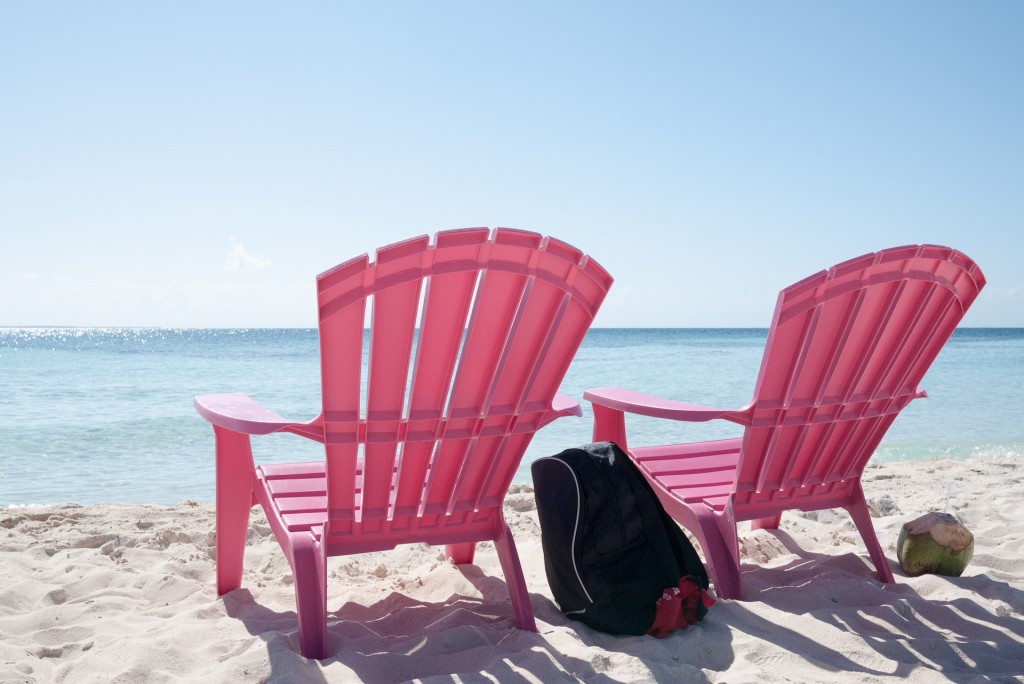 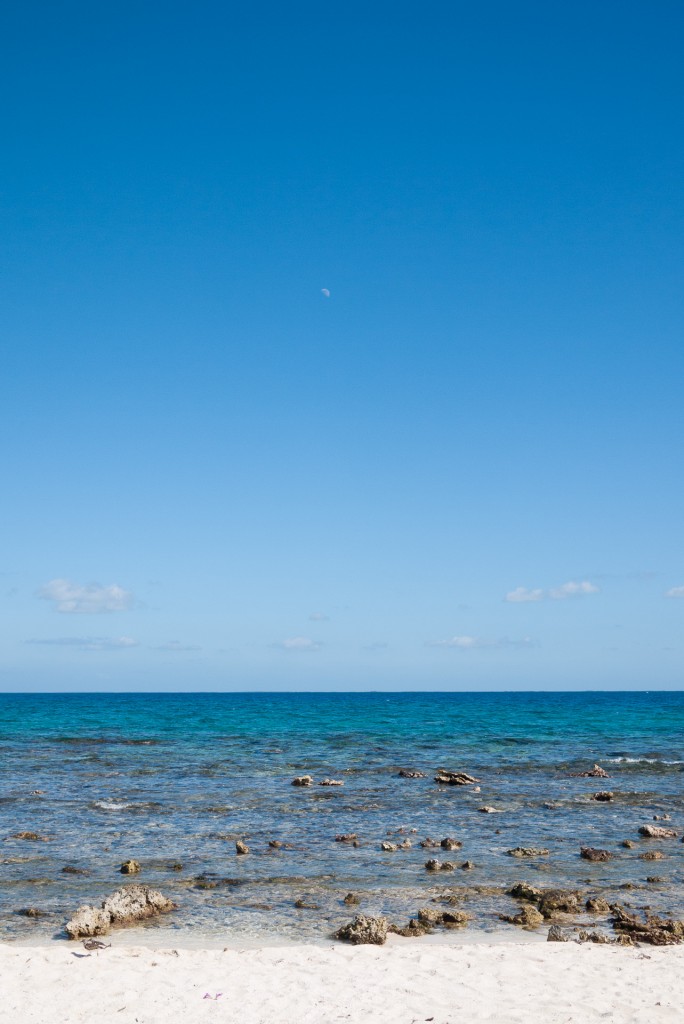 By the end of the excursion, we were exhausted and were happy to be back aboard the Magic by about 4PM in time for a late lunch, pre-dinner meal! And of course the obligatory sunset photo complete as we left Belize and headed north for Cozumel, tailing the Mariner throughout the night. 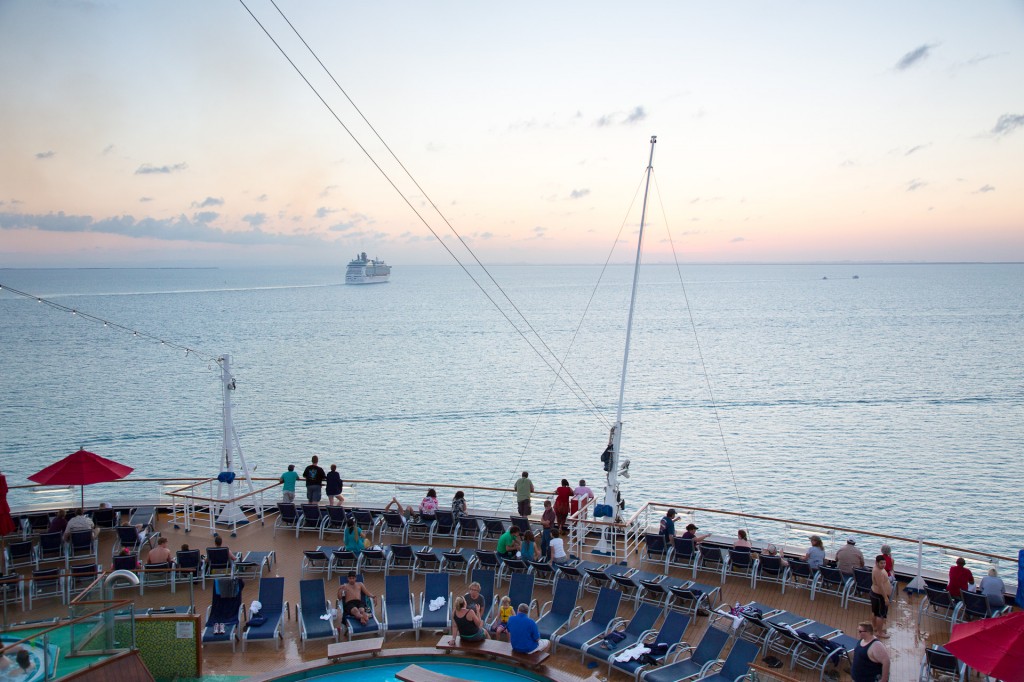 Dinner itself wasn’t too impressive this evening, but we had an incredible day on a private island! For my entree, I had some fish dish. I believe it was mahi mahi. The slab of neopolitan ice cream cake had an interesting twist to it. 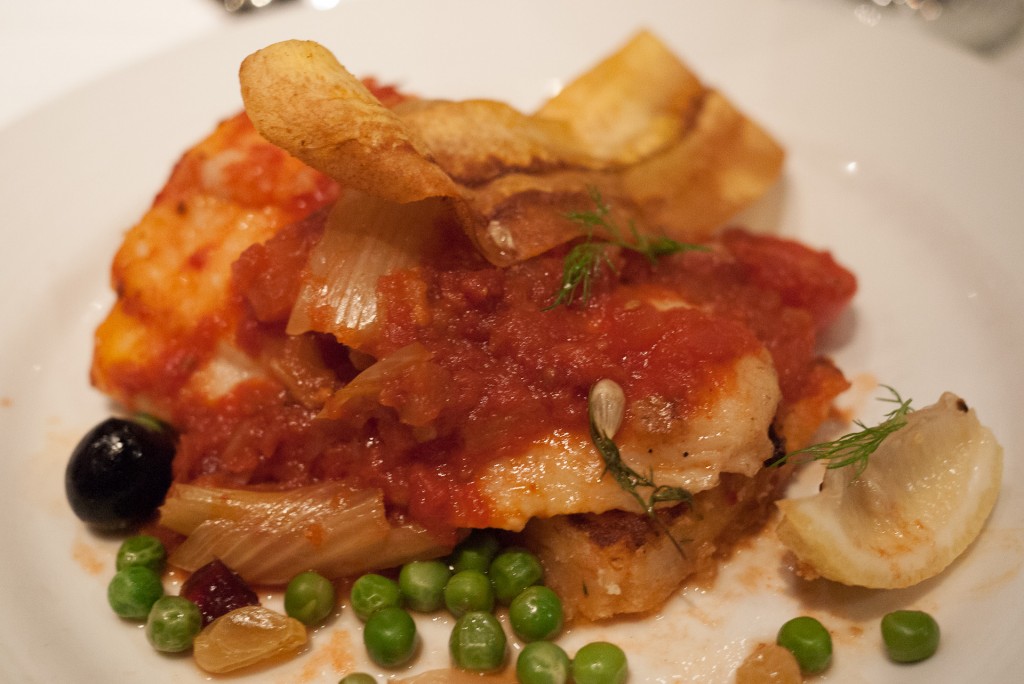 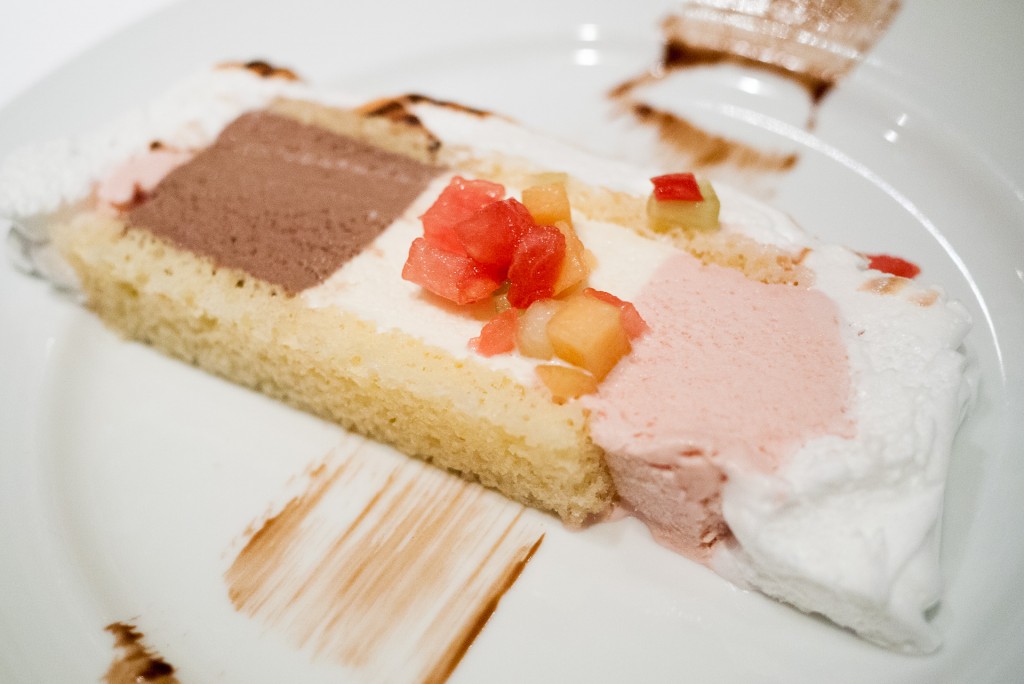 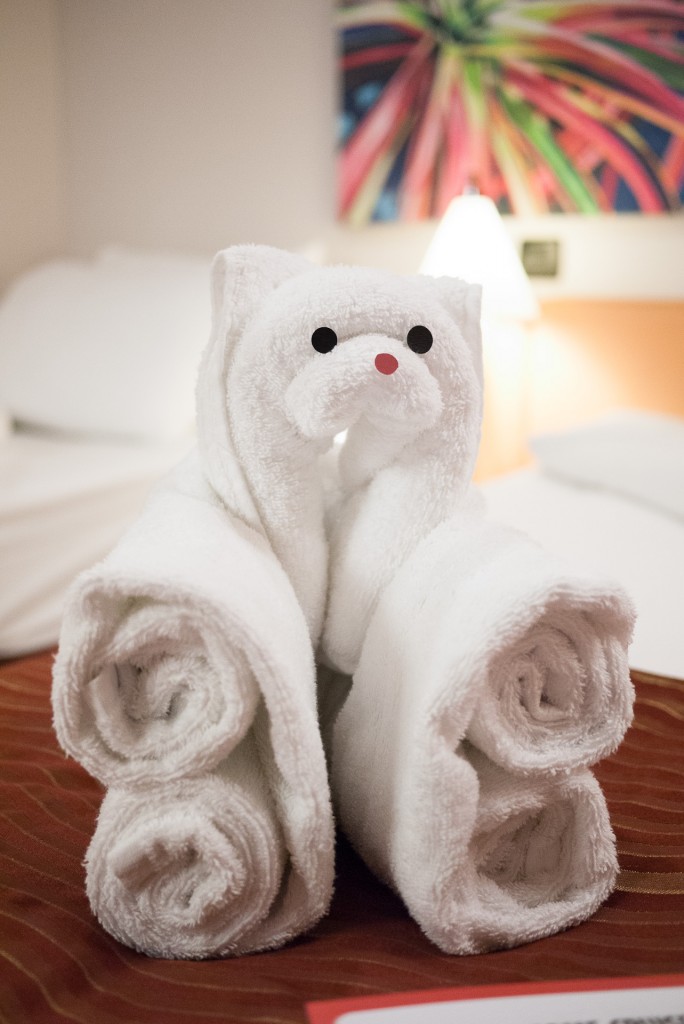