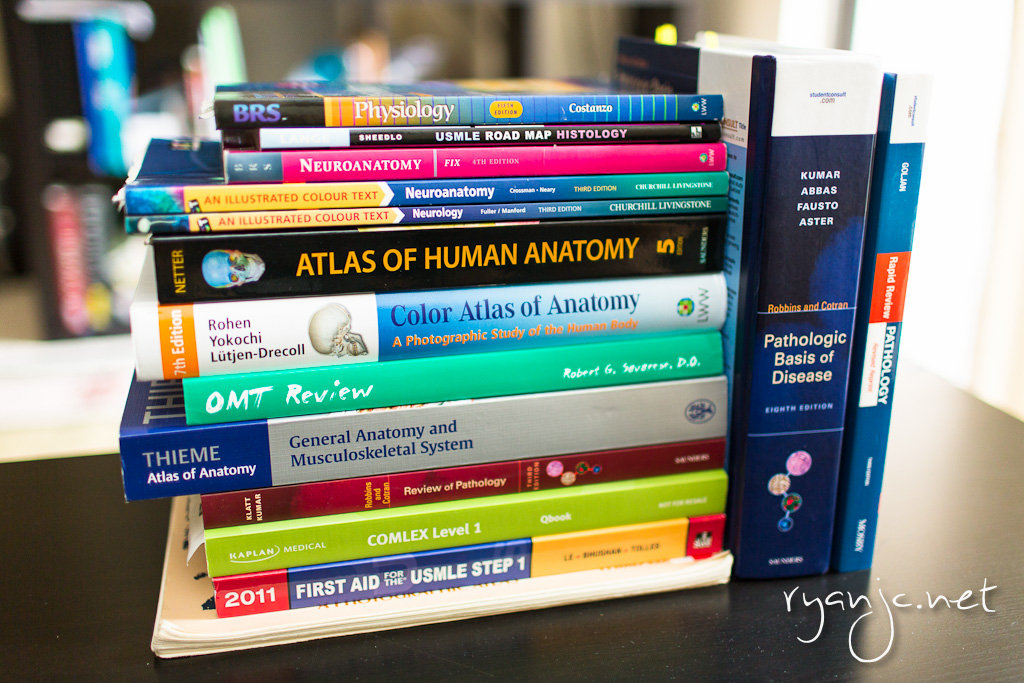 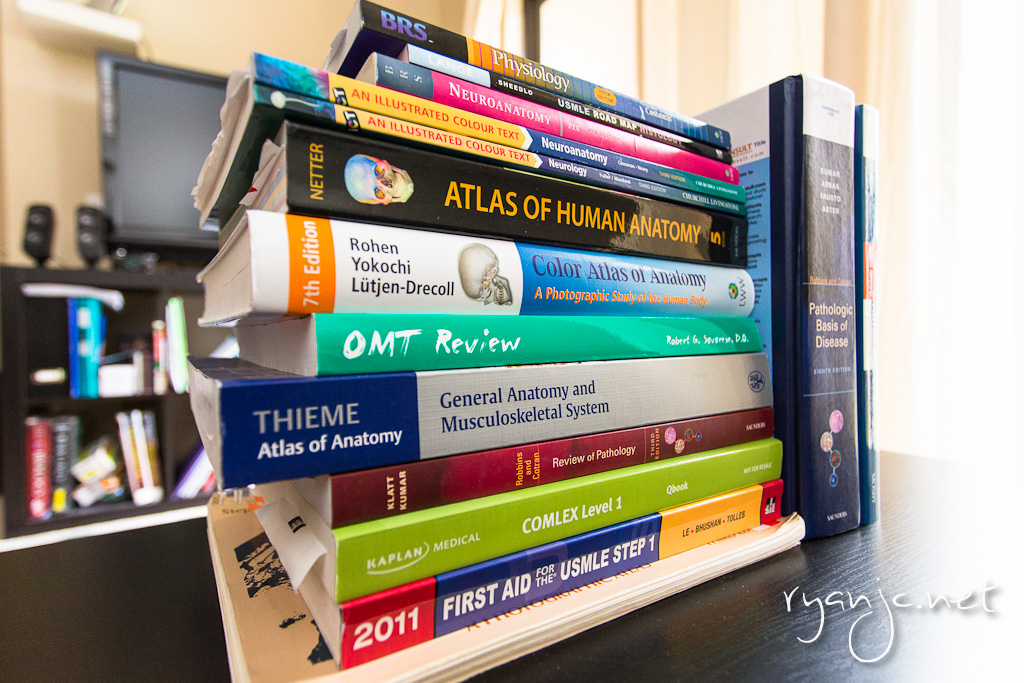 Ok gunner. so you’ve made to be an MS2, congrats! Now the real med school starts! Second year is far more interesting than the first year because it’s easier to comprehend and apply. BUT (you knew it was coming right?), it’s much harder than first year because the amount of information they want you to know can be overwhelming. Remember to cover the big picture first, and then fill in the details. Pace yourself throughout each course and don’t let other gunners get you down. Everyone learns differently.

This list is not as long as the books for first year simply because each class is laid out pretty similarly.

Each course is roughly 4-6 weeks and is split in two tests to cover usually pathology first and treatment/management on the second. The first test is usually hardcore memorization of all of the facts pertaining to each illness and the second is about memorizing the drugs and treatments but also figuring out which is the best given a certain presentation. For me, they were about equally as challenging. One wasn’t overwhelmingly easier than the other. Another plus of second year is that nearly all the professors were either DOs or MDs. Consequently, they were much more understandable and had real-life experiences to share.

During each class, the powerpoints should be your first resource when it comes to the knowledge each professor. They put a lot of time into their slides so you can be sure that they include what is important. Everything else (here) is supplementary or for board studying (another post specifically on board prep later).

I would also like to thank you for reading this blog and supporting it. If you don’t already have an Amazon Prime account, you’re missing out. Free two day shipping without a minimum and $3 overnight is wonderful. If you would please sign up here, it would help me continue to grow the site. If you’ve already had the free Amazon Student trial, you are eligible for 50% off the annual price. And with a student account, you can refer your friends too for Amazon credit!

As always, if you have any comments/questions, shoot me a PM or leave a comment below. 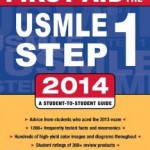 Buy the latest for the year you are taking. From 2012 to 2013, there were many glaring errors fixed with the errata (found online). The COMLEX and USMLE are two of the biggest tests you will be taking, you want the latest book. It won’t be out till the end of December, but be sure to pick it up for the spring semester and start marking it up! I ended up just starting fresh from 2011 to 2013 and just wrote new notes and highlights on my 2013 edition. Having gone through board studying, it probably would’ve been better to use this book earlier on and transfer my notes over to the new version. By the end of the summer though, it was every color of the rainbow from cover to cover and fully marked up(well, minus the extra pages at the front and back). Regardless of whatever else you use, make this your primary resource. It has everything you must know. 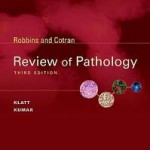 This book will test how in-depth your knowledge of each chapter of Robbins is. Smoe of the questions are very detailed (too detailed in some cases). Whatever chapters are assigned for the test, do these questions. Some of them will show up again and I’ve even had a professor suggest looking at them because she pulled questions from it. She also recommended that I do all the questions without looking at the answers to simulate a real testing environment.

Pocket Companion to Robbins and Coltran Pathologic Basis of Disease

If you’re looking for a quick fix read for a quiz or need a high yield overview for a specific topic in Robbins, this book is useful. Many people in my class had this book and preferred it to the density that is mama Robbins (big Robbins). It covers most of the important tested material.

Dr. Sattar is a great teacher. He makes learning each system as clear as possible. His knowledge of pathology is extensive. He’s not as funny as Dr. Goljan (more on this later), but he covers most of the same things in a systematic manner. Pathoma is best used at the beginning of each new course. Watch the chapters for the upcoming system and annotate the book. You won’t catch all of it, but at least you’ll have notes to refer to and it will introduce the system to you so that in class you’ll be able to follow along easier. I didn’t discover Pathoma until shortly after the first class (for us, renal) started, but I really wish I had started from day 1!

Pathology is quite heavy on Step 1 and Level 1. First Aid only has an overview of pathology. You really need something like Pathoma or Rapid Review of Pathology to cover what you really need to know.

Step up to Medicine

From what I could tell, the third and second editions are the same in content. The third edition has much nicer pages and color to emphasize and organize facts. Step Up is an internal medicine book that covers all of the big systems and the high-yield treatments and management that go along with each disease. This is the book you’ll want to be using for most of the second system’s tests. I used most during first semester GI, renal, cardio, and pulmonary (hence why it’s an internal medicine book). You will use this during your IM rotation and shelf, so it’s a good book to be familiar with now.

You know what it is. Almost every day will have numerous pages to read. Each set of chapters pertaining to a system is a test and you’re expected to know everything. The first couple tests are shocking, but you’ll get adjusted to it. If you’re not a reader, get baby robbins or get an outline of the chapter because one way or another, you need to know the material inside and out to do well. At the least, please look over and recognize the pictures. 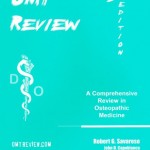 Just get it already. You’ll be using this for the next several years for Level 1, COMAT shelf exams third year, and for Level 2. It’s a good review of the principles behind each major concept and area of anatomy. 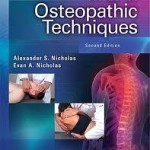 You’ll need this book too each week for lab techniques. Second year OMM is pretty much the same except that the techniques are more applicable to that system which helps make it more interesting and applicable in practice. From my OMM rotation, I saw a lot of chronic back, neck, and hip pain. We didn’t use OMT too much for say chronic kidney disease or pneumonia. Rather, we treated the whole person and looked for somatic dysfunctions all over. This book will continue to be helpful third year when you need to look up how to properly do a technique.

Dr. Goljan has to be my favorite professor. I’ve watched Pathoma and watched some DIT, but Dr. Goljan stands out amongst the rest. He’s energetic, funny, knowledgeable, and knows what is high yield. The audio is great to go along with each class (you can annotate your notes into your Pathoma book) because it’s quite similar, or First Aid if you’d prefer.

The reason his book deserves an honorable mention is because while I did buy it. I didn’t end up using it that much. I had some friends who swore and stuck by it rather than pathoma. I would say, do one or the other. Rapid Review is more detailed and covers more diseases. The newest edition supposedly is much better organized and refined. Dr. Goljan’s images are money!

DIT is expensive and you only get 30 days to watch hundreds of videos online. My take on it is that if you have the time and are a visual learner, go for it. Otherwise, save the time. It would probably be better off spent on Pathoma/Goljan. The DIT videos go through first aid at a very slow pace. Also, there questions are a time sink. I had many friends get bogged down in doing their workbook and short-answer questions. They’re pretty good, but too much. Spend your time wisely and do the right questions, namely, UWorld.

I can’t stress this enough. Do as many questions as you possibly can. I suggest buying a 1 year subscription to USMLE World (UWorld) and doing all of the questions for each block. It’s $420 for 1 year plus the two self assessments but worth it. This is the best question bank you can possibly buy. Some upper classman will frown upon doing qbanks “too early.” I say forget that. There’s no harm in being prepared. If you’re truly worried about running out of questions, fear not. There are several question banks out there with thousands of questions each. UWorld alone has 2200 for Step 1. I ended up doing it twice. About half during the year (I wish I finished it) and another 1.5 times during my dedicated study period. Yes, you will remember some of the questions, but that’s ok because you are learning high yield material. There’s a reason they made a question out of it. Treat it like a book, learn from it like any other resources. I am a big fan of UWorld.

It’s about $100 for a year. Much cheaper than UWorld and rightly so. These questions are too detailed and not as high yield as UWorld. I ended up doing about 600 or so out of their 2,000 since my school purchased it for us. The COMLEX portion of this Q bank had about 150 OMM specific questions which I found helpful for the OMM class final and COMLEX Level 1.

I had several friends purchase Combank because they were serious about wanting to do well. They said the style of these questions mirrored the COMLEX Level 1 very closely. I can also report that at least one of my friends improved his COMSAE (practice COMLEX) score by a very significant amount which he attributes to this Q bank.

From what I’ve read on sdn, this is a better qbank as far as COMLEX questions go. Both are supposed to be really similar.