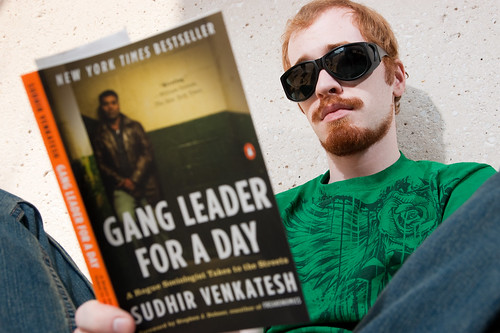 This is Scott. We were setting up our light stands and lights nearby for our school’s photo club when it was my turn to use the Pocket Wizard transmitter and someone suggested I shoot the guy sitting around the corner. I think the colors and everything just work so well in this image and I’m thrilled how it turned out. Scott was humble about it. He was just like "hmmm, that’s about how I thought it would turn out!" lol. Anyways, someone suggested I get down low and shoot upwards with the book in front. So I put my camera really close to the floor, knelt down, used live view with the articulating screen and shot upwards towards Scott. This was one of two identically framed shots. The first was the book in focus and this one is of his face in focus. This one puts more emphasis on his face but still allows the book’s title to be readable at F/5.6.

It was great today to get out of my comfort zone and shoot something I would otherwise rarely shoot with a bunch of other people.

I would like to thank Scott for his time and reading his book so well. I hope he makes it to head gang leader some day!

Strobist info: 2 Speedlights (SB600 and SB24) fired with PW. One slightly behind and to the left of the camera, and the other to the right for some fill. The other is to the right.

Guess I’m starting a new project too, not sure how fast I’ll finish but count this as number 1/100 strangers.