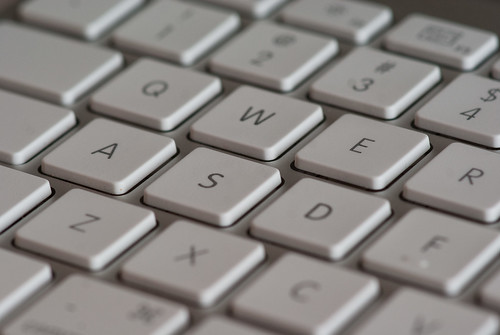 I’m no Apple fanboy but every once in a while, they have a nice product that looks worth having and unlike anything else on the market. Well, I got a new Apple Bluetooth Wireless Keyboard to use with my desktop and laptop. It’s got a very nice layout with the chiclet keys (space in between). It seems to be built very sturdy and most of it (the entire top and shell are brushed aluminum. The back unfortunately is cheap plastic. Overall, it’s a great little keyboard that can reduce your desk clutter and work anywhere wirelessly (bluetooth).

I should also mention it works well on Windows Vista and Windows 7. Syncs easily via Bluetooth and you can type on it as any other keyboard. Nearly every button works.The Mac command key becomes the Windows key. The eject key (upper right) and the FN key (lower left, a horrible spot by the way, should be switched with the control on all keyboards) does not work. Other than that, it’s plug and play. I wish you could remap these keys to something useful, but I guess it’s a sacrifice of running it in Windows.